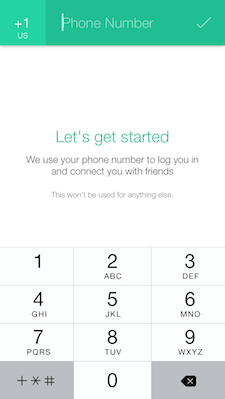 One of the most critical parts of any app is the onboarding process -- what it takes to get you interested in, educated about, and logged into an app or service. Developer Ben Johnson of Raizlabs provided a look at first impressions in apps in a 360|iDev 2014 presentation this morning titled "Onboarding and the first 60 seconds".

Johnson notes that as humans, we're all pre-programmed to have first impressions based on a single quick glance at another person or thing, and the same is true when we're working with apps. Most developers devote a ton of time to the app and totally ignore the onboarding process, but the first impressions of an app are always important as many users will delete it if it appears confusing or has a difficult signup process.

The first impression starts even before the app ls loaded onto a device -- as Johnson demonstrated, the App Store icon, screenshots, and even the messages used in screenshots are very important in terms of capturing potential customers and establishing branding.

Users "window shopping" for apps often make their decision based on what happens when they first launch an app and see what Johnson referred to as the "Why should I care?" screens. Johnson used the IFTTT app's description screens as a positive example of how to describe what the app does before even asking a user to sign up for an account. A "skip" button is very important at this point, since some users may know already what an app does and don't care about the description.

Johnson suggests that developers "ask nicely" when something is going to happen, referring to this as "The Pretty Please Prompt". More users tend to accept permissions if you let them know why you're going to be doing so. For example, if you want users to be able to share something with friends, ask them for permission to use the address book when they actually try to perform that function and not before. Tell users why the app needs permission and then actually ask for the permission, and they'll be much more likely to give the approval.

Johnson also suggests that login pages be delayed as long as possible after launching the app or be made optional. If you really need for users to log in, don't throw it at them right up front. He'd also like to have developers standardize on a single format for login screens to keep them from confusing users. It would be much easier for people to log into a variety of different apps if each used the same basic user interface and labels. Sign In, Register, and Forgot Password are really the only functions that need to be used, and Johnson has gone on record as wanting all developers to adopt those labels.

It's also important to do a "dress rehearsal" of app functions or gestures, but only if you need it. In other words, if you have a very intuitive user interface in your app, don't take users through all of the the different steps. Only 42 percent of paying users of the first version of Johnson's Free-Time app ($2.99) made it all the way through six pages of descriptions. Johnson said that they're not providing that "how to" in the next version of the app.

Mailbox is an app that requires users to actually go through the gestures to learn them, which Johnson lauded as a great way to get people used to using the app's unique gesture UI. In other words, users actually use the app to learn their way around the UI.

Johnson then displayed some examples of good, bad, and ugly onboarding processes. The ugliest was the iTunes U app, which he considered one of the worst because it appears to switch to another app during onboarding and requests permissions without describing why it's doing so. For the "bad" example, he chose ChitChat (see image at the top of this post). This free app makes a lot of requests for permissions, displays screens with no prompt except for a circled check mark, and forces a user through 11 pages of tutorial screens -- without a "skip" button.

For the example of a good onboarding process, Johnson selected NPR One. The app launches with a "play" button that plays an audio introduction while showing potential users what's going on. All of this happens before requesting permissions and a signup.

The first few seconds of using an app is very important to users, and Johnson suggests that you obsess about how to grab a user and get them to use the app. This is one case where user testing can really make a difference in how your app is perceived by your target audience.

Be sure to visit TUAW tomorrow for more news about this year's 360|iDev conference.

In this article: 360iDev, app store, developer, events, iOS, onboarding
All products recommended by Engadget are selected by our editorial team, independent of our parent company. Some of our stories include affiliate links. If you buy something through one of these links, we may earn an affiliate commission.