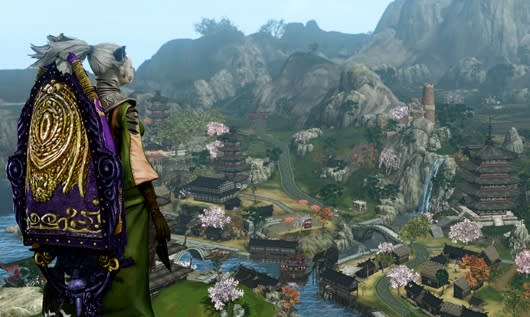 The packed ballroom at Trion's PAX Prime party erupted into giddy cheers last night when the team announced that ArcheAge's launch is merely a couple of weeks away. This gorgeous fantasy sandbox blew up the alpha test population and is poised to be a huge coup for Trion as the studio adds another title to its growing portfolio.

While the official launch date is September 16th, there will be an open beta from September 4th through the 8th, followed by a headstart launch on the 12th for founders.

The team expressed confidence in the alpha testing and the back-and-forth communication with developer XLGAMES. If XLGAMES is the proud mom and dad of ArcheAge, I was told, then Trion is the proud auntie and uncle. A lot of work has gone into straightening out regional differences for the western audience as well. For example, in Korea it's quite common to play an MMO with the intent of selling your character for actual money, which places a different value and emphasis on what you accumulate and do. Since such sales aren't often legal here, adjustments had to be made for the localized version. There was also a special cape item that Korean players could use to identify botters, which was used responsibly in that country but has apparently been wielded as a griefing tool in the west.

ArcheAge won't be budging on its commitment to an open PvP world; it's simply how the game is constructed. Players who want to avoid getting ganked will need to keep an eye on war zones that move throughout the world and accept the inherent risk that comes with attempting trade in those regions.

The team hopes that there will be enough space on the servers for all subscribers to grab an open world housing plot if desired. Coming some time after launch will be castles, which are larger structures that guilds can build, maintain, and defend together. Trion said that server transfers won't be in for release but are being worked on for the future.

In this article: aa, arche-age, archeage, beta, castles, con, convention, event, event-coverage, events, expo, fantasy, head-start, headstart, housing, launch, massively-event-coverage, open-beta, pax, pax-2014, pax-prime, pax-prime-2014, penny-arcade-expo, pvp, release, sandbox, sandpark, server-transfer, trion, trion-worlds, xl-games, xlgames
All products recommended by Engadget are selected by our editorial team, independent of our parent company. Some of our stories include affiliate links. If you buy something through one of these links, we may earn an affiliate commission.