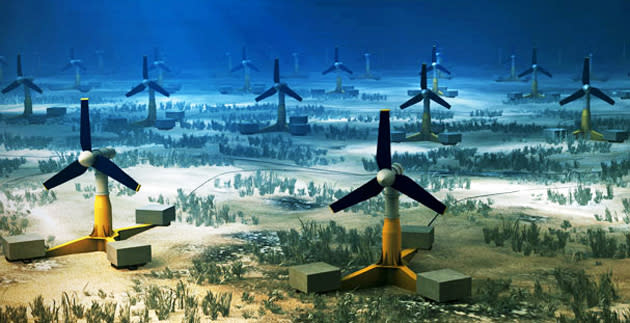 Mobile technology continues to expand and evolve, but until we develop a way to charge our devices on the go, we'll continue to jockey for outlets at airports and coffee shops. Enter Angelo Casimiro, a 15-year-old who has developed a shoe that harnesses the power of footsteps to charge your phone. The youth of today continue to be at the forefront of renewable energy innovation; a 14-year-old named Gregory Martin recently made a major biofuel breakthrough with a technique that boosts the amount of lipids in algae by over 500 percent.

On the green transportation front, rumors are swirling that Ford and Hyundai are currently developing brand-new hybrid models that will compete with Toyota's top-selling Prius. Chinese scientists have drawn up plans for a supersonic submarine that could travel from Shanghai to San Francisco in just two hours. The submarine would be enveloped in an air bubble, thus cutting down on friction, enabling it to travel at a blistering 3,600MPH. An electrical engineer from Bangalore recently created a solar-powered tuk tuk, which he plans to drive from India to London to showcase the power of clean energy. School is now in session -- and to encourage students to have a green academic year, Inhabitat launched a contest where you can win a brand-new $574 Public Bike or one of three solar backpacks, worth $129 each!

The world's largest tidal energy project got an $83 million shot in the arm last week, as Atlantis Resources secured funding for a massive underwater energy plant off the coast of Scotland. Dubbed the MeyGen project, the tidal energy farm will produce enough juice to power 175,000 homes. In other clean energy news, scientists in India have figured out a way to generate energy from elements found in silk moth cocoons. And a Spanish design firm recently floated plans for an ambitious project that would create a vast hydroponic food belt spanning 1.5 million square miles of desert in the Arabian Peninsula.

It's said that 3D printing is the next frontier in architecture and design, and architect Adam Kushner is taking it to a whole new level by 3D printing an entire 2,400-square-foot home in Upstate New York. Kushner will use a large 3D printer that produces stone-like objects from sand or other materials mixed with a magnesium-based binder. In other green architecture news, Mexico-based Studio Cachoua Torres Camilletti recently designed a set of undulating skyscrapers that are topped with rice paddy terraces. The Australian design firm studio505 completed work on Phoenix Valley, a massive green-roofed arts complex that received China's highest sustainability rating. The Buckminster Fuller Institute announced its 20 semifinalists for the 2014 Buckminster Fuller Challenge, one of the world's top annual design contests, and Inhabitat rounded up some of its favorite entries. In wearable technology news Ralph Lauren launched a high-tech T-shirt that monitors its wearer's vitals, and a team of undergraduates invented a nail polish that detects date-rape drugs. And in sustainable food news, scientists have figured out a way to use yeast to create real cheese that is 100 percent vegan -- and they've just launched a fundraising campaign to bring it to market.

In this article: eco, environment, green, inhabitat, inhabitatsweekingreen, solar, transportation
All products recommended by Engadget are selected by our editorial team, independent of our parent company. Some of our stories include affiliate links. If you buy something through one of these links, we may earn an affiliate commission.