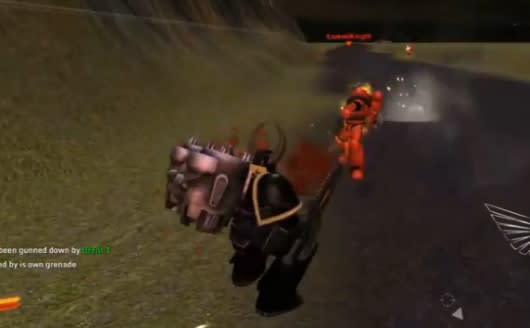 Warhammer 40,000: Eternal Crusade is most emphatically not about two things: PvE and lone rangers. While there will be a smidgeon of PvE content in the released game, the focus of the developers is about coordinated group PvP. In fact, coordination is an essential part to Eternal Crusade's experience, as the devs cited the chaos of PlanetSide 2 as something that they wish to avoid.

Instead, using technologies such as Eternal Crusade's single server, low latency, and the built in Razercom voice chat, tools are in place to allow players to find friends and squadmates and talk with them. Going off on one's own is a recipe for a quick death, while sticking with a squad to accomplish objectives and summon in reinforcements will be the path to progress. Different terrain and structures will also require different military thinking, shifting from guerilla warfare to scorched earth madness.

At PAX Prime, the devs were showing a very early alpha build to allow eight players to engage in small-scale PvP. The team stressed that the skirmish was definitely about skill instead of stats, although careful planning and strategy were just as important as quick reflexes. The ultimate goal is to help your faction take over as much territory as possible, transforming captured cities into faction-themed landscapes in the progress.

Eternal Crusade has at least two more years of development left before launch, but it was encouraging to see a fully functional PvP match that had players counting headshots more than bugs. Stay tuned for my hands-on experience with the title.

In this article: action-mmorpg, behaviour, behaviour-interactive, con, convention, eternal-crusade, event, event-coverage, events, expo, massively-event-coverage, pax, pax-2014, pax-prime, pax-prime-2014, penny-arcade-expo, warhamer-40k, warhammer, warhammer-40k-eternal-crusade, warhammer-eternal-crusade
All products recommended by Engadget are selected by our editorial team, independent of our parent company. Some of our stories include affiliate links. If you buy something through one of these links, we may earn an affiliate commission.