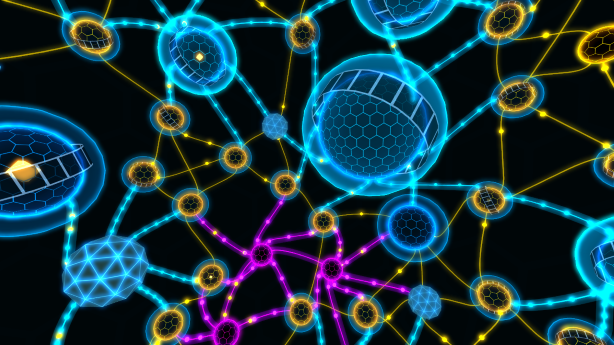 E McNeill's Darknet was the winner in the open call category of the 2013 Oculus Indiecade VR Jam. It's a strategy-puzzle game designed for Oculus Rift where players explore a virtual reality computer network and use viruses, worms, exploits and other hacker tools to capture sensitive data from what may or may not be a shady megacorporation. It's practically the definition of cyberpunk, sharing much in common with one of the genre's defining novels, Neuromancer.

However, McNeill told Joystiq at PAX Prime that he doesn't particularly like Neuromancer, nor many other cyberpunk tales. "I like the idea of cyberpunk," McNeill said, expressing his feeling that many of the genre's stories – especially those featuring hacking – tend to feel empty and without substance. McNeill proposed The Matrix as an example:

"In The Matrix, [the character Cypher] says, 'All I see is blonde, brunette, redhead.' But the falling symbols don't mean anything. They're just backwards kana letters." McNeill said that Darknet is a game aimed at maintaining the sense of mystery that The Matrix's iconic green rain of characters creates, but simultaneously providing an experience where what the player sees and does "actually means something."

In Darknet, players are presented with a web of connections that looks like a neural network. The tutorial level I was shown contained dozens of spherical nodes, each with curved tubes sprouting outward, connecting them to other hubs of data. Selecting a node transported me inside the sphere and presented me with a board full of hexagonal tiles; the virtual battleground where my leet skillz would be needed if I was to prevail. My destination was the data packet held in the center of the board. To get there, I needed to inject viruses into specially-marked light blue tiles and set them loose. Once enacted, the viruses would infect all bordering tiles and continue to do so, spreading exponentially. However, should the virus spread to another light blue tile, it would trigger an anti-virus program that would race to undo all of my progress.

This dual nature makes blue tiles – and other obstacles in the game – simultaneously function as threats to overcome as well as resources to be utilized. On more difficult puzzles, I found myself purposefully triggering clusters of anti-virus tiles so that I could access another blue tile further away without having to worry about triggering them in a way that would impede my progress.

It sounds complicated, and before I sat down with the game myself and tried it, it looked complicated as well. McNeill says that's by design. He explained that when players see what at first glance appears to be "baffling complexity," they're more impressed by both their own progress later on, as well as the skills of those who are able to strategize and complete puzzles faster than they themselves can.

"I want a decent player to look like a wizard to someone who hasn't played, and I want someone who's played a lot to look like a wizard to a decent player," McNeill said. I compared the situation to watching an expert player of Minesweeper performing calculations in their head at a speed unfathomable to newbies, and McNeill nodded his head in agreement. "You're deciphering an arcane script of technology," he said. After spending roughly 20 minutes with the game, capturing and hacking node after increasingly-difficult node, it's clear that I've only deciphered the first page of a technomancer's extensive spellbook. McNeill said we'll get to read the rest when the Oculus Rift reaches consumers.
[Image: E McNeill]
In this article: cyberpunk, darknet, e-mcneill, indie, oculus, oculus-rift, pax-prime-2014, pc, virtual-reality, vr
All products recommended by Engadget are selected by our editorial team, independent of our parent company. Some of our stories include affiliate links. If you buy something through one of these links, we may earn an affiliate commission.