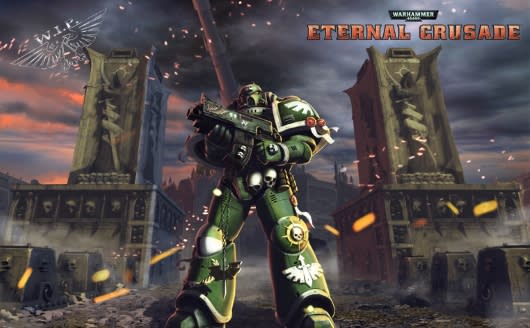 After getting the pitch from Warhammer 40,000: Eternal Crusade at PAX Prime, I was given the opportunity to sit down and experience a PvP bout first-hand. I'll share a little pet peeve of mine before we get into the meat of the hands-on, which is that I really don't like it when developers stand over your shoulders at demos barking instructions to you. I wasn't given much of an opportunity to do what I wanted to; instead, I was constantly responding to the dev's commands!

In any case, for a pre-pre-alpha build, I'm somewhat impressed that Eternal Crusade was able to cobble together a very playable deathmatch with several classes and two vehicle types (Rhino and Predator). My first class was something of a lumbering tank, well-armed but a clunky jumper. I opted instead to get a jetpack as an assault trooper, willingly trading firepower for the awesome ability to do huge leaps and be able to clutch on to the side of a building and jump once more.

Under the instruction of my drill master, I hopped into a tank and learned how you can move around between the different weapons and positions. I wasn't deemed to be a great driver, so I contented myself manning a machine gun while another player in the room took us into the enemy base. The weapons had a nice kick to them and were pleasing to fire, although I did have to watch out for both overheating and running out of ammo.

As a ground-pounder I had a less successful career. Oh, I amused myself greatly and learned all about the cover mechanics, but if a heavy fighter came my way, I found myself on the bad side of an execution move: Yes, you can execute downed enemies in all manner of gruesome ways more befitting a slasher movie, but this is the Warhammer 40,000 universe, after all.

I came away from the demo thinking that Eternal Crusade has a pretty solid foundation already as a PvP third-person shooter. It pays incredible attention to detail in honor of the WAR40K tradition, and more importantly, it's pretty satisfying and responsive in a fight. I don't see it being an incredibly deep game, but it could be homing in on the territory of a certain other space-themed online shooter. That may be all it needs to get a foothold for a shot at victory.

In this article: action-mmorpg, behaviour, behaviour-interactive, con, convention, eternal-crusade, event, event-coverage, events, expo, hands-on, massively-event-coverage, pax, pax-2014, pax-prime, pax-prime-2014, penny-arcade-expo, warhamer-40k, warhammer, warhammer-40k-eternal-crusade, warhammer-eternal-crusade
All products recommended by Engadget are selected by our editorial team, independent of our parent company. Some of our stories include affiliate links. If you buy something through one of these links, we may earn an affiliate commission.