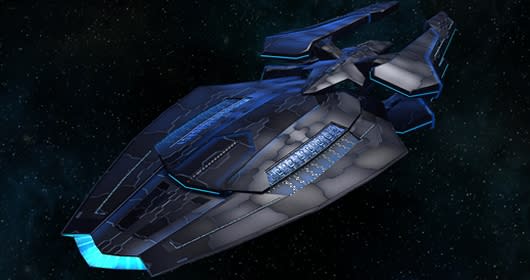 When you head out into the Delta Quadrant in Star Trek Online: Delta Rising, you're going to want to be prepared. You'll want the best possible ship, one capable of making use of everything the quadrant has to offer. That's what the Delta Rising: Operations pack is meant to do. It's the equivalent of the Legacy of Romulus pack from the last expansion, a collection of ships, titles, officers, and bonuses to get you going in the expansion when it goes live.

Eight ships are included in the pack: four Federation ships, two KDF ships, and two Romulan Republic ships. Some of these ships also come equipped with Intelligence Officer bridge stations, the new type of officer being added with the expansion, allowing you to scan for weaknesses in enemy craft and exploit those flaws. It also contains exclusive titles and officers, three ship upgrade modules, and special Talaxian uniforms. The pack is priced at $125 and is available for purchase now if you'd like to be kitted out and ready to go for launch.
In this article: cryptic, cryptic-studios, delta-rising, expansion, expansions, expensive, f2p, founders-packs, free-to-play, item-packs, news, news-items, pack, packs, perfect-world, perfect-world-entertainment, pricey, pwe, sci-fi, star-trek, star-trek-mmo, star-trek-online, star-trek-online-delta-rising, sto
All products recommended by Engadget are selected by our editorial team, independent of our parent company. Some of our stories include affiliate links. If you buy something through one of these links, we may earn an affiliate commission.