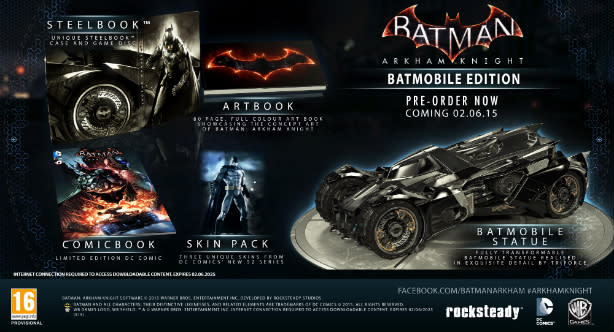 Batman: Arkham Knight is due out worldwide on June 2, 2015, Warner Bros. and DC announced today. In June this year, Arkham Knight was delayed into 2015.

The launch date announcement comes with descriptions of two special editions, the Limited Edition and the Batmobile Edition. Both will be available in limited quantities in North America, Europe, Australia and New Zealand. The Limited Edition comes with an art book, SteelBook case and game disc, the Arkham Knight #0 comic, an exclusive skin pack with three The New 52 skins, and a Batman memorial statue. It's $100 (€120, £90) for PS4 and Xbox One. It's available for PC in Europe, Australia and New Zealand only, for €100 or £75. · SRP: $199.99 / 199.99€ / 169.99£ (Console only)
In this article: batman-arkham-knight, dc, dc-comics, microsoft, pc, playstation, ps4, release-date, Warner-Bros, Warner-Bros-Interactive-Entertainment, xbox-one
All products recommended by Engadget are selected by our editorial team, independent of our parent company. Some of our stories include affiliate links. If you buy something through one of these links, we may earn an affiliate commission.