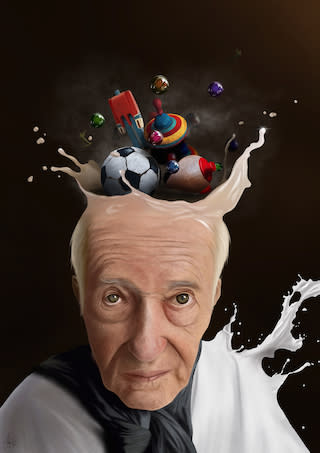 Despite Steve Jobs' assertion at the launch of the iPad in 2010 that it was more of a "content consumption tool" than something that people would use to create content, exactly the opposite has been true. Musicians use iPads on stage for a variety of uses, writers have written books on the devices, and artists find the iPad's display to be a wonderful virtual canvas for drawing and painting. TenOne Design runs an annual Pogo Art Contest that revolves around its Pogo, Pogo Connect, and Pogo Sketch styluses. The 2014 contest just ended, and we thought you'd love to see some of the artworks that came out of the minds of some really creative folks.

At the top of this post you see this year's winner, Memories by Spanish artist Jaime Sanjuan. The painting is incredibly detailed and evokes comparison with works by Pablo Picasso and Salvador Dali. Below is a detail of the winner of the Current Events category, a painting called "Curiosity's First Year on Mars" by Ray Cassel. Cassel is an award-winning illustrator who specializes in science and wildlife work.

And finally, the winner in the "The Way You See It" category for 2014 is a vaguely spooky painting by Leah Korbin titled "Night Swim" (below). Korbin is a visual and musical artist based in Los Angeles, California. There are more paintings where those came from! Be sure to visit the Ten One Design 2014 gallery for a look at all the creative entries that came in this year.

In this article: art, iPod, painting, ten one design, ten one design pogo art contest
All products recommended by Engadget are selected by our editorial team, independent of our parent company. Some of our stories include affiliate links. If you buy something through one of these links, we may earn an affiliate commission.