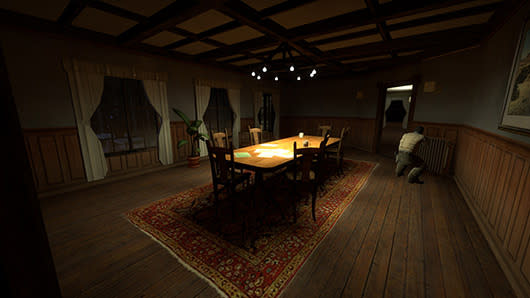 If you felt that critical darling Gone Home featured too little gameplay and not nearly enough gunplay, today's your lucky day: A Counter-Strike fan going by the name of "Nipper" has recreated Gone Home's idyllic suburban location within Valve's beloved first-person shooter.

Designed for up to 32 players (but recommended for far fewer), cs_gonehome essentially transplants the tenets of Counter-Strike into the meticulously detailed home that served as the setting for Gone Home. Each new round sees players purchasing weaponry and gear before setting out to hunt down the opposing faction, while hostages are spawned at random each time the game resets itself.

Despite this, many commenters on Steam are quick to point out that the design of the Gone Home house doesn't lend itself well to Counter-Strike's gameplay. Complaints range from a lack of lighting in the cellar, to too many areas in which campers can hide and narrow corridors that make Counter-Strike's most overpowered guns even more effective.

"There are several ways in which the map doesn't work all the well in [Counter-Strike], but that's hardly the point, I think," writes Steam user Space Hamlet before describing the map as "a fascinating intersection of the design of two games."
[Image: Valve]
In this article: counter-strike, counter-strike-global-offensive, fullbright, gone-home, map, pc, steam, valve
All products recommended by Engadget are selected by our editorial team, independent of our parent company. Some of our stories include affiliate links. If you buy something through one of these links, we may earn an affiliate commission.