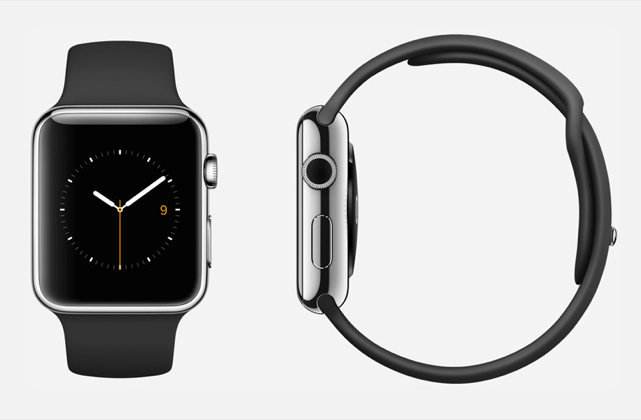 The Apple Watch represents both a mix of strengths and omissions. It combines features from three exciting markets that deserve representation in the Apple line, adding daily contexts that continue to move users away from screens and into real life. The Mark 1 unit may not fulfill all the possibilities that these technologies can offer, but I see it as a bold, strong move into a new product category.

Mobile keeps changing the ways we relate to technology. The Pebble showed us what a heads-up (wrist-up?) notifier looks like. It offers a way to move computing away from screens and into the context of the real world. I hesitate to use the word "footprint" since the metaphor is even more strained than the ones I normally misuse, but the Pebble computing footprint is tiny. With just a twist of the wrist, it enables "glance" computing. The wrist-based Pebble offers always-available integration with our digital life stream.

Google Glass introduced wearable ubiquitous computing. Its natural-language, voice-driven command system enables users to request information, perform searches, and interact with an enhanced reality. While the new Apple Watch won't overlay your visual field with wikipedia pages, its Siri integration enables you to use voice searches on the go.

A few caveats however. First, iOS 8 already supports "Hey Siri" on your mobile devices -- so long as you're tethered to a power source. "Hey Siri" is the "Okay Glass" prompt for hands-free Siri queries in iOS 8 and later. Second, you need to push a button on the Apple Watch to access that Siri functionality. You must press and hold the new "digital crown" (read iPod-touch-wheel-for-the-2010's) to activate Siri interaction. And, of course, the Apple Watch isn't going to float any virtual reality displays in front of you.

The Fitbit for all its flaws and reliability issues went down another path. Its the ever vigilant monitor that watches our movement and our sleep, that tells us how our body's activities relate to our goals. It brings a ubiquitous connection between what we do and how we reflect on those choices. While the iPhone 5s offered some minor mirrors of that functionality with step tracking, it demanded a greater connection between portage and observation than most of us were willing to use.

The Apple Watch has a bigger wrist-print (there I go again with that metaphor thing) and you cannot use it 24 hours a day. It has to be charged on a daily basis (the charger coupler is cool) so it doesn't look like you'll be able to use it for sleep tracking, so don't expect it to act as a full time health tracker.

On the plus side, the Apple unit does include a heart rate monitor and pedometer, which are probably higher on the average Fit user's must-have list than sleep tracking. Despite this, sleep tracking is a big gap in the "help me track and tune my life" wish list for many potential customers.

The Apple Watch might not yet have its one "big idea" moment but it offers a lot of satisfying little ideas and for now that's probably enough.

In this article: apple watch, hardware, opinion
All products recommended by Engadget are selected by our editorial team, independent of our parent company. Some of our stories include affiliate links. If you buy something through one of these links, we may earn an affiliate commission.
Share
Tweet
Share