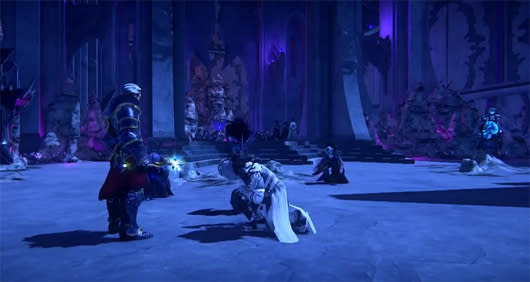 We've known for a while that SOE is cooking up some sort of emergent AI concoction for EverQuest Next. The company famously partnered with Storybricks last year to bring its fantasy NPCs to life, and a newly released video sheds a bit more light on what exactly that means.

The clip stems from a panel that was originally conducted at this year's SOE Live, which has now been distilled to a more manageable five-minute running time. Click past the cut to find out about EQN's lack of traditional quest hubs and how to make NPCs bow before your mighty axe of authority.

In this article: ai, ai-video, eq, eq-next, eqn, eqn-ai, eqn-life-of-consequence, eqn-video, everquest, everquest-next, fantasy, life-of-consequence, sandbox, soe, sony-online-entertainment, storybricks, video
All products recommended by Engadget are selected by our editorial team, independent of our parent company. Some of our stories include affiliate links. If you buy something through one of these links, we may earn an affiliate commission.