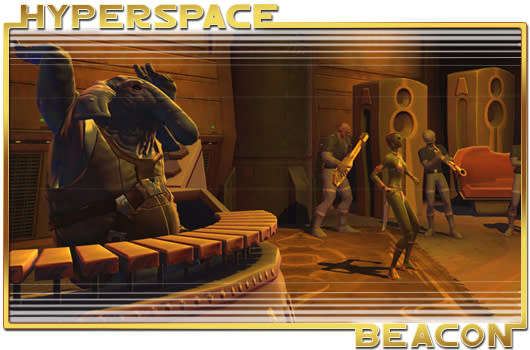 This past week on The Republic, I talked to prominent community members about transparency and broken promises in regard to Star Wars: The Old Republic. Both Heather from Corellian Run Radio and Redna from Ootinicast agreed that BioWare's community team has communicated too little and too infrequently with the players and has actually driven people away from the game because of that lack of dialogue.

Also this past week, former Operative Class Representative Snave interviewed Community Manager Eric Musco, asking why the community team has been so quiet as of late and why it promised to deliver information by the end of September but it didn't. Snave also asked why there hasn't been more transparency from community team, especially when Musco specifically said that one of the things that he wanted from the community team was more transparency. Snave accused Musco of speaking out of both sides of his mouth when he said that he wanted more transparency but then wouldn't reveal what was going on with the announcement.

Compounding recent events was a kerfuffle over the ongoing Cantina Tours. Players became upset when the Cantina Tour date for Las Vegas was moved from November 7th to November 15th, even though back in February, Community Coordinator Courtney Woods posted the planned dates of the Community Cantina Tour with the caveat that they were "subject to change."

As a community, SWTOR players don't seem to be happy with or without transparency. The SWTOR community team cannot, as the saying goes, win for losing. What is the solution here? Let's discuss the details and maybe a solution or two.

When you sit down with a BioWare developer, you can usually tell that he or she truly enjoys SWTOR, but the community team -- especially the community manager -- has traditionally seemed to be holding something back. We saw this behavior in every CM we've had, from Sean Dahlberg to Stephen Reid to Eric Musco. Clearly, the position holds a lot of secrets that it cannot reveal. Every community manager for SWTOR has appeared to be tight-lipped, so I don't want to single out Musco specifically.

At the start of the interview with Snave, Musco explained what he wanted to do as a community manager. "When I took over as community manager -- if you look back to when I first started -- the thing I really wanted to push on was transparency." Of course, there was a bit of snickering between the two because they both know that BioWare has not been transparent about everything. But Musco explained himself: "The problem is that in the game industry, stuff changes constantly -- day to day everything changes. I think a lot of times when we say something -- anytime we say anything -- it's automatically assumed that that's a promise."

Snave tried to encourage Musco to relax his policy on reveals, arguing, "I'm pretty sure that if you were actually transparent and said, 'We're trying to this,' instead of kind of semi-promising things, that wouldn't be an issue."

Fast forward only a couple of days later to the Las Vegas cantina tour official announcement. The community team posted its official statement regarding the time and location of the Las Vegas Community Cantina Tour: November 15th at the Mandalay Bay North Convention Center. And Twitter exploded, in a big, bad way. Players, specifically those from community-run podcasts, were outraged over the announcement because they had all bought tickets to Las Vegas for the weekend of the 7th.

The original announcement by Community Coordinator Courtney Woods stated that cantina tour would take place sometime between November 7th and 9th. However, she was very specific in her words before giving the dates: "Below is the list of locations as well as the estimated date time frame for the events. As always, when we are closer to the event we will post a blog with further details for that Cantina Tour -- until then these are subject to change!"

She gave this announcement after one of the BioWare's gaming livestreams, which are mostly social events not intended to have any big reveals. Yet Woods attempted to be transparent and gave the community what it asked for: the planned-but-not-firm dates for the Community Cantina.

Of course, it's upsetting when you're out money and time and vacation days and then the plans change. But in this case, it's not BioWare's fault. As much as it sucks, we just cannot blame the community team. It's one of the issues that we run into with transparency -- the further ahead the team tells you its plans, the more likely they are to change, and yet the more likely players are to get upset when that change inevitable occurs. This issue affected only a handful of people, but imagine if BioWare talked about something that impacted a larger group of players but then had to change its plans because of legitimate reasons. If blacklash was this big from a small group, it can only get worse when more people are affected.

I'm sure there is some middle-of-the-road solution that allows from transparency but at the same time doesn't upset the playerbase. But right now, it doesn't seem that players would be happy either way. There are consequences no matter what the team does, and if the community wants transparency as it says it does, then it's going to have to live with the outcomes of that transparency.

A games-reporter friend of mine once told me that she wishes that game reveals would wait until a couple of weeks before launch, but otherwise remain silent. In the case of MMOs, where content comes in patches, then current content should sustain the game until the next patch, or the developers should just plan on having major ebbs and flows in the finances. In a broad sense, I suppose she's arguing that community building by a game developer doesn't work.

Because I am a community builder, I prefer transparency, with all its downsides and drawbacks. I like the idea of being transparent with the community, allowing the players to be a springboard for development ideas. This gives community team a good idea of how well received future content will be. But a team has to be prepared for a bit of backlash when things don't work the way originally predicted. Certain games, like Landmark and Star Citizen, have fared well by letting the audience know what's happening. Then again, neither of those games is Star Wars.

I don't think there is a right or wrong way to do it; both have consequences both have rewards. What is a developer to do?

In this article: BioWare, community, community-team, communty-manager, corellian-run-radio, courtney-woods, eric-musco, featured, Heather_pls, hyperspace-beacon, LucasArts, ootinicast, Redna, sean-dahlberg, snave, Star-Wars, star-wars-the-old-republic, Stephen-Reid, swtor, the-old-republic, TOR, transparency
All products recommended by Engadget are selected by our editorial team, independent of our parent company. Some of our stories include affiliate links. If you buy something through one of these links, we may earn an affiliate commission.