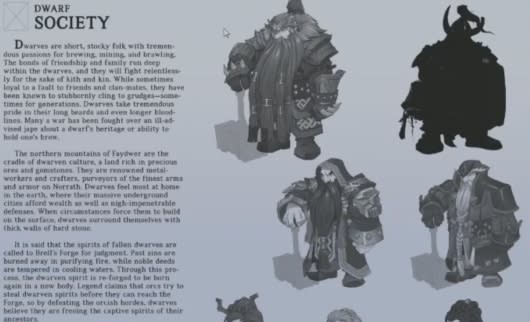 When you talk about basic fantasy races, Dwarves and Ogres are up there as the classics. But which do you find more interesting to learn about in EverQuest Next? The latest episode of the game's Workshop Show is available now; art director Rosie Rappaport and creative director Jeff Butler are joined by lead content designer Steve Danuser to show off the style and lore of both races while players vote over which one should be the next workshop focus.

Dwarves, for their part, are fairly familiar to anyone who has played EverQuest or EverQuest II (or pretty much any fantasy game from 1967 to the present): short, stocky, bearded, ancestral, and traditional. Ogres, meanwhile, have changed a lot, with a renewed developer emphasis on making the race more appealing to players in general whilst offering a wider range of available style options for players. You can watch the full show past the break, but be forewarned: It's a long one.

In this article: backstory, design, dwarf, dwarves, eq2, eqii, eqn, everquest, everquest-2, everquest-ii, everquest-next, jeff-butler, look, lore, news, news-items, ogre, ogres, race, races, rosie-rappaport, soe, sony-online-entertainment, steve-danuser, video, videos, visual, visuals
All products recommended by Engadget are selected by our editorial team, independent of our parent company. Some of our stories include affiliate links. If you buy something through one of these links, we may earn an affiliate commission.