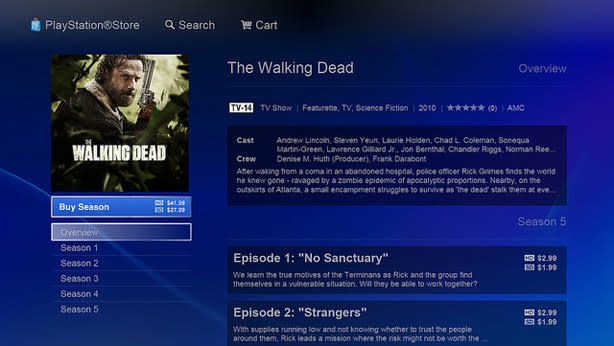 Sony has introduced a new feature for the PlayStation Store and its Video Unlimited service, allowing users to buy full seasons of featured content at a discount.

Starting today, PSN shoppers can queue up a full season of their favorite shows with a single "Buy Season" purchase. The feature is available for the PlayStation 3 and online via the PS Store this week, and support for the PlayStation 4, Bravia TVs, and Blu-ray players is coming soon.

Sony commemorates today's feature launch with a collection of discounts for several popular series, including The Walking Dead. Season Pass launch deals go into effect on October 30, and extend through November 17.

[Image: Sony]
In this article: film, playstation, ps3, ps4, season-pass, television
All products recommended by Engadget are selected by our editorial team, independent of our parent company. Some of our stories include affiliate links. If you buy something through one of these links, we may earn an affiliate commission.