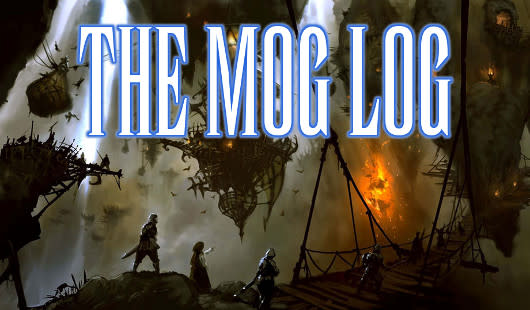 I can't really stop talking about Final Fantasy XIV when it's been weeks of news feasts for the game, can I? Hot on the heels of the last fanfest, the one-day London fanfest happened, and the development team compensated for the shortened overall time by filling the keynote with revelations. The Vanu Vanu are a thing which I currently want to cuddle, we will get personal airships, and we're getting Dark Knight -- a job that starts at level 1 with no base class, breaking all the established rules of the game.

There were basically two sets of reactions to this news. The first group was busy releasing its collective gasp of joy that it had been holding on to since Dark Knight was practically revealed in Las Vegas. The second group was screaming to the heavens about the fact that this job was going to be a tank instead of a DPS. So it merits some discussion, as do the other things we know about it because boy, Tank #3 is going to be a weird one.

"But Dark Knights in the franchise aren't tanks!"

First off, I want to make it clear that I totally understand players who do not want to tank. I get that. Tanking, as I have said elsewhere, can be a crazy high-stress role, and it's a pain to be a tank learning a dungeon for the first time, especially when the game you're tanking in loves to throw you unexpected curveballs, which Final Fantasy XIV does frequently. And I can totally understand wanting to wield fulminating darkness and drains as a DPS role -- that's completely understandable.

Final Fantasy XI did not make Dark Knights into tanks. Then again, the game also didn't make anyone into strictly anything until much later in its lifespan. It was a game with class design that generally aimed toward throwing a bunch of stuff at the wall and then seeing what stuck. Claiming that Dark Knights must be damage dealers as a result of that one game also neglects the game's chronic problem with finding proper tanks, or the many ways that players could put together a party to mitigate or eliminate the normal Dark Knight issues.

Final Fantasy XIV's take on Dark Knight is a tank. And really, a warrior in heavy armor with a huge sword that's spreading contagion around as a tank is an idea I love every time it comes around. I loved World of Warcraft's Death Knight tanking (or at least, I did when you could tank as Frost, but that's another discussion). The fact that this is where the class went is no more or less valid than deciding that this game's Ninjas are not tanks.

And if you want a DPS class to play that wields a big weapon in slow and dangerous arcs? Well, Dragoons exist. And I'd be surprised if we don't find out we're also getting another melee DPS class (my money is on five new jobs in total: new tank, new healer, new ranged DPS, new magic DPS, new melee DPS). I totally understand wanting to bring back your scythe-wielding damage dealer from Final Fantasy XI and dropping Papa Roach references in your Last Resort macros again, but that's not what we're getting any more than Dragoons are getting wyverns. Things change.

You will have to decide whether your want to play a Dark Knight outweighs your desire to not tank. I find it an easy debate, since I like tanking anyway. (Especially if it's not as boring as Paladin.)

No base class, starting new

This was the other big surprise about Dark Knight, and it ties into something a lot of people have speculated about: Classes are kind of surplus to requirements at this point. This may or may not be true, depending on further job reveals.

The idea of the class/job split is functional enough. Rather than create a new class from the ground up each time the team wants a new specialization, it creates a job, and you don't even have to re-level the class. In an ideal world, this makes it easy to have a single class that branches off into multiple different roles with different priorities. Arcanist branches into Summoner and Scholar, which play differently and are both fun. And... then no other class does that at all, so you wind up with one class that has a split and others that always become the same thing when they change.

And now Dark Knight isn't even bothering. That could mean lots of things, really. The obvious possibility is that the game is just doing away with base classes in the future, but I tend to doubt that, simply because we've got a new class coming out tomorrow, and as much as I already love Ninja with every part of my body it seems like it would be silly to launch Rogue to Ninja pre-expansion when the future plan is to get rid of Rogue in the first place.

Another possibility is that the job is explicitly meant to avoid any potential repurposing by having no abilities that can be cross-classed. That also makes some sense; it allows Dark Knight to get in on some casting abilities that tanks generally lack in the game without breaking balance. For that matter, it could be that the base class would need to have all sorts of fulminating-darkness-related abilities that just did not map well into potential cross-class skills for anyone.

Or Square really is going to get rid of base classes in the future, which is a distinct possibility. It's just not where I'll put my money.

Feedback, as always, is welcome in the comments below or via mail to eliot@massively.com. As much as I would have liked to talk more about stuff from London like flying mounts and the adorably fat Vanu Vanu, there just was not the space today, and tomorrow I'm going to be waking up at 4 a.m. to start blasting forward on Ninja. So expect to hear about that in a week.

In this article: backstory, class, classes, console, consoles, dark-knight, expansion, expansions, fantasy, featured, ff, ff14, ffxiv, ffxiv-fanfest, ffxiv-fanfest-2014, ffxiv-heavensward, final-fantasy, final-fantasy-14, final-fantasy-xiv, heavensward, lore, mog-log, opinion, speculation, square, square-enix, squenix, the-mog-log
All products recommended by Engadget are selected by our editorial team, independent of our parent company. Some of our stories include affiliate links. If you buy something through one of these links, we may earn an affiliate commission.