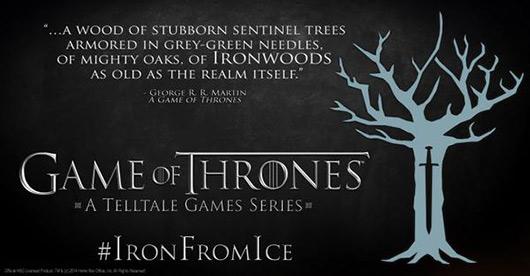 Game of Thrones: A Telltale Games Series is still scheduled to launch in 2014, though there's no solid release date just yet. Telltale PR Specialist Laura Perusco confirmed the date to a fan on Twitter asking about the Xbox version's due date.

@RatedR2012 No specific release date announced yet, but I can confirm that the season IS premiering later this year. :)

Time is running out this year – Halloween, the final day of October, is on Friday, and then it's straight into two final months of holiday madness. We still don't know what the Game of Thrones game looks like or what storyline it will follow, though Telltale has dropped two hints: The Ironwoods and clan name Forrester, both with the hashtag #IronFromIce.
[Image: Telltale]
In this article: game-of-thrones, game-of-thrones-a-telltale-games-series, TellTale-Games
All products recommended by Engadget are selected by our editorial team, independent of our parent company. Some of our stories include affiliate links. If you buy something through one of these links, we may earn an affiliate commission.