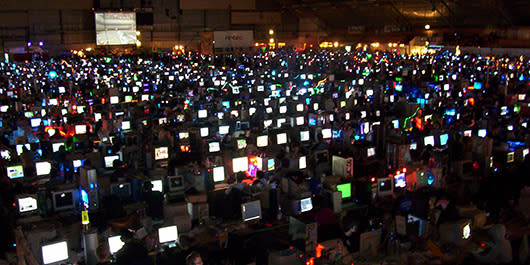 Following a lengthy tenure as head of one of the world's most prominent eSports festivals, Dreamhack CEO Robert Ohlen has been "relieved of his duties," according to Fredrik Nystrom, Dreamhack's head of PR.

Instead of exiting Dreamhack gracefully, Ohlen opted to publicly protest the decision via odd, grammatically baffling tweets. "Truth. Honor. etc. dont exist May @DreamHack die an ignoble death This is the last communication from BossDH a pox on all you're houses [sic]," Ohlen wrote, later adding that he had "just been sopranoed."

The Daily Dot claims Ohlen's release follows "an internal power struggle" at Dreamhack, but offers no details on the cause or results of this conflict. Ohlen has been replaced as CEO by self-described "festival guru" and former Dreamhack events manager Marcus Lindmark.
[Image: Wikimedia]
In this article: dreamhack, marcus-lindmark, robert-ohlen
All products recommended by Engadget are selected by our editorial team, independent of our parent company. Some of our stories include affiliate links. If you buy something through one of these links, we may earn an affiliate commission.