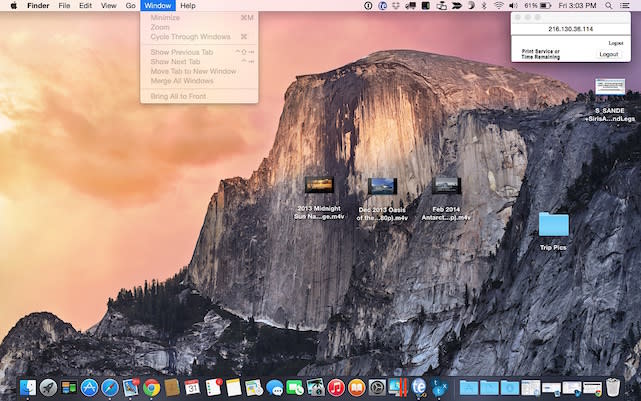 A few weeks ago our very own Mel Martin pointed out that you can enable the new "dark mode" in OS X Yosemite simply by going to System Preferences > General and checking the "Use Dark Menu and Dock" box. But what if you're Mr. Fussypants, love the dark Dock, but don't exactly like the look of white letters on a dark background in the menubar? That's the dilemma that ManyTricks guru Peter Maurer found himself in. Thanks to a post on Rob Griffith's "The Robservatory" blog, we found Peter's trick to keep your Dock dark and your menus shiny white.

You'll need to be comfortable with the command line interface before making the changes. Here we go:

Note that the App Switcher (Cmd-Tab) is associated with the Dock, so it will remain dark as well. If you decide to script the entire thing for automatic setup at login, be sure to put a slight delay between steps 2 and 3 so that the Dock has a chance to relaunch.

It's a great trick, and many thanks to both Paul Maurer and Rob Griffiths for bringing it to light.

In this article: hack, how-to, howto, OS X, OS X Yosemite, paul maurer, rob griffiths
All products recommended by Engadget are selected by our editorial team, independent of our parent company. Some of our stories include affiliate links. If you buy something through one of these links, we may earn an affiliate commission.