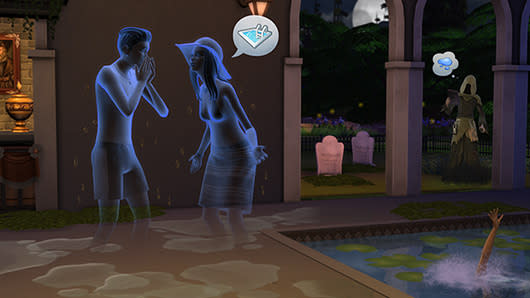 Making good on its earlier promises, developer Maxis has added much-requested swimming pools to virtual life sandbox The Sims 4. According to EA, the build options for pools have been greatly expanded, allowing players to build pools not just in the backyard, but also on the second and third floors of their virtual homes. The update also brings with it a new swimwear line so that your virtual people can look sharp as they lounge near the water.

Eventually, all Sims players develop a sadistic streak and decide that maybe the Sim universe would be better off if their virtual people met a watery demise. The pool comes in handy there too, though EA notes that any ghosts created by drowning may carry a fear of water with them to the afterlife. It's unknown how this might affect a ghost's actions beyond the terrifying spectral neuroses seen in the above screenshot.
[Image: EA]
In this article: ea, ghosts, mac, maxis, pc, pools, the-sims-4
All products recommended by Engadget are selected by our editorial team, independent of our parent company. Some of our stories include affiliate links. If you buy something through one of these links, we may earn an affiliate commission.