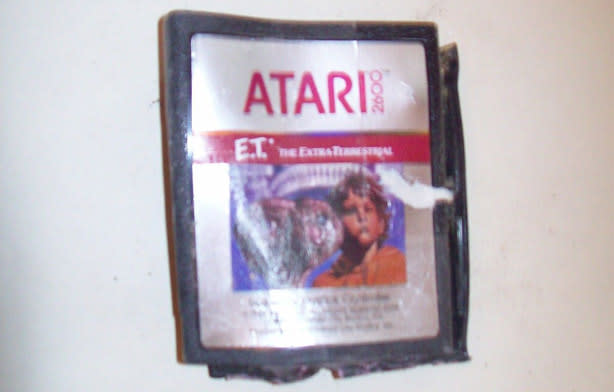 Want to buy some literal garbage? An eBay seller is auctioning off a collection of Atari 2600 cartridges recovered from a recent excavation of a New Mexico landfill, including several crushed copies of the infamous dud ET.

An excavation team headed out to Alamogordo, New Mexico, earlier this year in the hopes of discovering the truth behind a reported landfill stuffed with video games and consoles in the months leading up to the video game industry crash of 1983. The venture yielded many shrinkwrapped copies of ET, among other decades-old merchandise abandoned by Atari. A documentary film covering the dig, Atari: Game Over, will launch exclusively for Xbox consoles later this month.

Bidding starts at $50 for the unearthed games, which vary in condition but are otherwise remarkably well-preserved, considering they've been sitting in a landfill for more than three decades. Many ET cartridges are already going for hundreds of dollars, but if you're looking to snag a stinky piece of history for yourself, you might be able to pick up a cheap copy of Asteroids, Centipede, Defender or Swordquest EarthWorld.
[Image: tbhs575]
In this article: alamogordo, alamogordo-landfill, atari, atari-2600, atari-game-over, ebay, et, history, new-mexico
All products recommended by Engadget are selected by our editorial team, independent of our parent company. Some of our stories include affiliate links. If you buy something through one of these links, we may earn an affiliate commission.