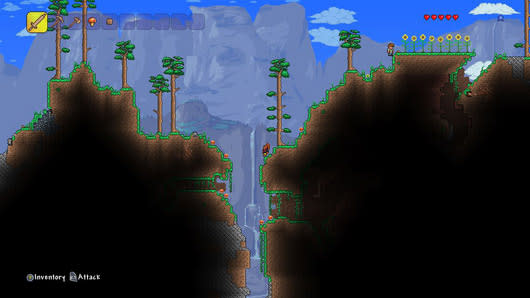 Re-Logic's 2D sandbox exploration game Terraria expands its reach to yet another platform with today's launch of an Xbox One port.

Terraria arrives on the Xbox One with a bevy of new items and characters not featured in last year's Xbox 360 version, including new construction components, pets, NPCs, and bosses. Over 1,000 new items are included in all, putting it on par with the recently launched PlayStation 4 edition. The port also boasts new tutorials aimed at first-timers, along with a split-screen co-op mode that supports up to four players.

The Xbox One version of Terraria is available digitally for $19.99.

[Image: 505 Games]
In this article: 505-games, microsoft, re-logic, release-date, terraria, xbox-one
All products recommended by Engadget are selected by our editorial team, independent of our parent company. Some of our stories include affiliate links. If you buy something through one of these links, we may earn an affiliate commission.