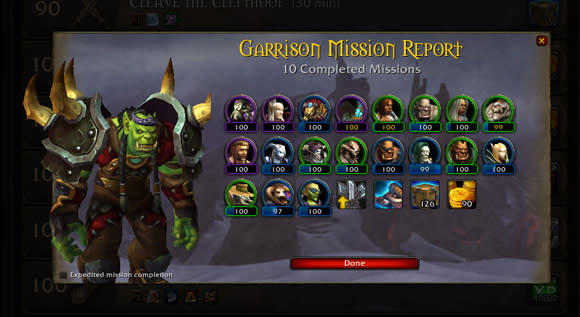 Garrisons are an integral part of the leveling game in Warlords of Draenor, but they're also part of the endgame, too -- collecting various followers and sending them on the appropriate missions will net you rewards like gear, gold, resources, and more. But although I love the garrison game, when you've got 20 followers, trying to keep track of who does what is almost a logistical nightmare. Sure, there's only a handful of threats that your follower's abilities need to counter, but remembering which follower does what is something that I still haven't mastered.

Beyond that, the mission interface itself is decent and fairly intuitive, but it's not quite as user-friendly as it could be. So it was with great anticipation that I awaited the inevitable addons that would take missions and follower management to the next level -- because if there's one thing I've learned in 10 years of gameplay, it's that addon authors are ridiculously talented when it comes to redesigning UI functions into elegant masterpieces of design. And the addon Master Plan by Foxlit has done exactly that with the missions and follower interface. The first thing you'll notice when you fire up Master Plan, if you have missions waiting to be completed, is that the addon will automatically complete a batch of missions in one lump sum, removing the "click on the treasure chest" element of turning in missions. There is a checkbox to turn off this option, for people like me that enjoy watching my followers complete their missions and clicking on the treasure chests to see what I've gotten. If, on the other hand, you're one of those people that enjoys a one-click complete-all style, it's available. Who knows -- several months down the road, I may grow tired of clicking through each mission and turn the option back on.

But the mission interface itself has far more surprises. Usually, missions are sorted by level -- highest level missions at the top of the screen, lower level missions at the bottom. Master Plan allows you to sort your mission order not by mission level, but by Mitigated Threats. The genius of Master Plan is that it will automatically go through your available missions, and match those against the followers you currently have free to complete missions -- and the missions you can readily complete will always be listed at the top of your mission interface.

In addition, each mission now lists icons of the threats it presents -- and mousing over those icons will give you a handy list of who, in your pile of followers, is capable of countering that particular threat, along with that follower's status. If a follower is currently on a mission, their icon will be greyed out, and the time in which they will return from their current mission is displayed. And just in case that doesn't make things clear enough for you, threats that you are able to immediately counter with available followers are outlined in green -- threats that you cannot currently counter are outlined in red. This helps you decide which missions are currently worth clearing out, and which should probably be saved for later. As for your followers, Master Plan displays numeric values in their XP bars, so you can see exactly how much XP they need in order to hit the next level, or quality level. In additon, the followers interface contains a row of icons at the top of the pane that clearly displays how many followers you have for countering each type of threat. It also lists any traits your followers possess -- including any profession buildings they are capable of working at. For players that are currently running with a level 2 Inn/Tavern, this makes it much easier to figure out what traits and abilities you should be recruiting for, and which ones you have completely covered. Again, mousing over the icon will pop up a list of which followers carry that particular ability or trait, as well as their status -- whether they are working a building, out on a mission, currently inactive, or ready to go.

It might not seem like a lot of changes, but Master Plan takes the mission and follower interface from relatively easy to use interface to a much more useful tool. While I'm not particularly a fan of the one-click mission completion, I can see where the option would appeal to people that don't want to spend forever clicking through missions in between dungeons, dailies, raids, or whatever other business they have on Draenor. What I really appreciate about this particular addon is both the low-key design -- Foxlit has pretty much just gone through the existing interface and seamlessly added useful tools where they are needed -- and also the way in which it presents information. Being able to see at a glance all of my followers various abilities and traits in one place makes it much, much easier to keep track of them all. If you've been struggling with the mission interface, or trying to keep track of who does what in your stable of followers, Master Plan is definitely worth checking out. You can find it for download on Curse, or over on Curseforge.
In this article: abilities, addons, follower-abilities, follower-managment, follower-traits, followers, foxlit, garrison-followers, garrison-management, garrison-missions, garrisons, master-plan, missions, traits, warlords-of-draenor, warlords-of-draenor-garrisons, wow-addons
All products recommended by Engadget are selected by our editorial team, independent of our parent company. Some of our stories include affiliate links. If you buy something through one of these links, we may earn an affiliate commission.