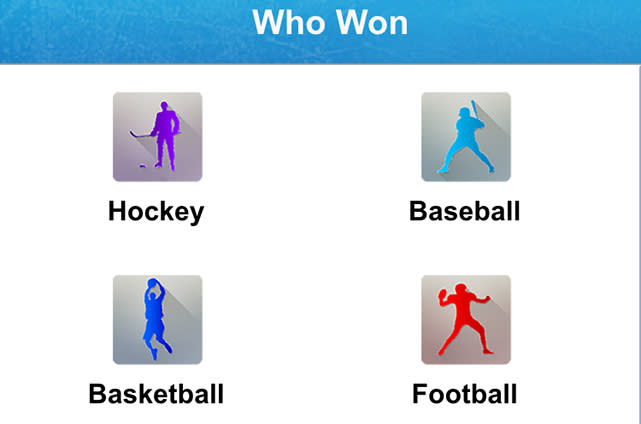 Many of us love to argue or rather have animated discussions about a variety of topics, politics, religion, where to go for the best hamburger and the king of argument starters: Sports. Now with Who Won Sports you and your friends can settle those disagreements by just pulling out your phone and using this free universal app.

Who Won Sports is a simple app that tells you at a glance just what the name implies, who won. You will find team championships, individual award winners and more for all the major sports. Choose your sport, then select which category you want and Who Won Sports in most cases, provides you with a list of winners by year going back as far back as the beginning of the competition or as long as the award has been given.

In the baseball category you can choose from twenty-two different championships or awards. You will find World Series winners going back to 1903, Cy Young winners, home run champs, Gold Glove winners, Manager of the Year awards for both leagues and many more including the winners of the College World Series in Omaha and the first player picked in the annual amateur draft held each summer. Did you know Rick Monday was the very first player picked back in 1965? You would if you had Who Won Sports. Overall the app has eight categories from which to choose: baseball, football, basketball, soccer, tennis, golf, hockey, and the Canadian Football League. Golf and tennis feature the four grand slam events in each sport. Tennis includes the Women's winners but no LPGA winners in golf. However the app does include Ryder Cup winners. Who Won Sports makes it much easier to access all this data than using a browser and search engine on your phone. The navigation within the app is a breeze. However I did find a couple of issues that troubled me.

For baseball and hockey you will get the winners in whatever year you select but nothing about which team they beat or how many games the series took. However, in the NBA you get a paragraph detailing the outcome of the series and the number of games. In the football category the listing is for NFL Champions but only goes back to the first Super Bowl in 1967. For each winner it tells you what number Super Bowl it was, where it was played and the two teams that played. Why do they provide more details for two of the sports but not the others?

Also what about all the NFL Championship games that were played before the Super Bowl started. And what about the American Football League? After all without the success of the AFL, we would have never had a Super Bowl. A little more attention and information would have made this app more complete. I believe you will find Who Won Sports a handy app to keep on your phone and for the most part it will settle a lot of discussions about who won what. You won't find the answer to who is the greatest NFL quarterback of all time but you can see who won the 1928 Stanley Cup if that become important - It was the New York Rangers if you need to know.

In this article: baseball, basketball, Champions, Cy Young, football, Gold Glove, golf, hockey, iOS, Masters, review, soccer, Stanley Cup, Super Bowl, tennis, Wimbledon
All products recommended by Engadget are selected by our editorial team, independent of our parent company. Some of our stories include affiliate links. If you buy something through one of these links, we may earn an affiliate commission.