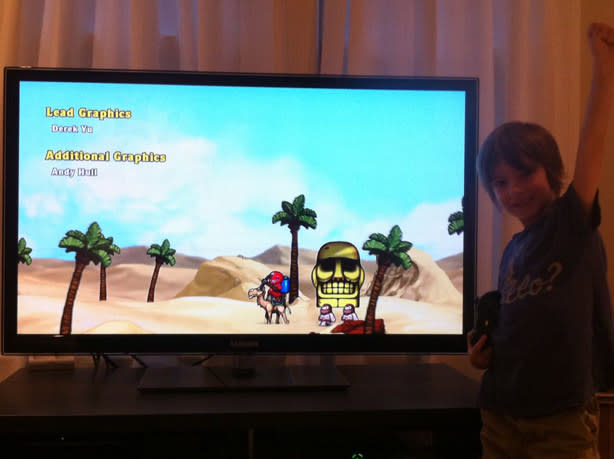 What happens when you introduce your child to classic consoles at an early age? You end up breeding a superpowered Wunderkind who can complete one of the most difficult games of any gaming generation.

In this recent feature, writer and XOXO conference founder Andy Baio details his fatherly quest to introduce his son Eliot to classic gaming consoles chronologically, as part of an accelerated history lesson started on his fourth birthday. The plan kicked off with father and son tag-teaming every entry in the NES Mega Man series, and the pair later moved on to conquering Super Mario World and The Legend of Zelda: A Link to the Past.

By the time he turned seven, Eliot had collected all 120 stars in Super Mario 64. Eliot then beat Mossmouth's infamously difficult roguelike platformer Spelunky at the age of eight. Earlier this year, he completed Spelunky's Hell level on his own -- a feat that eludes many gaming veterans with decades of experience.

"You're probably either thinking I'm a monster or a pretty awesome dad. Maybe a little of both," Baio concludes. "That's okay with me. My son is amazing, he loves video games, and more than anything, he loves playing them with me."

[Image: Andy Baio, Eliot Baio]
In this article: kids, mossmouth, nuclear-throne, parenthood, spelunky
All products recommended by Engadget are selected by our editorial team, independent of our parent company. Some of our stories include affiliate links. If you buy something through one of these links, we may earn an affiliate commission.