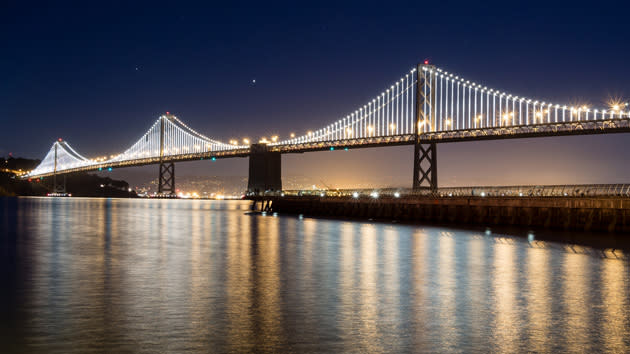 The 25,000 computer-driven LED lights on San Francisco's Bay Bridge were only meant to be part of a two-year art project, but it looks like they'll eventually become a permanent (and frankly, rather pretty) part of the landscape. The non-profit behind the lights, Illuminate the Arts, has raised the $4 million necessary to both cover the costs of new gear and reinstall the lights after they're taken down during cable maintenance. From then on, transportation authority Caltrans will pay the $250,000 a year it takes to keep the illumination running. There will be a period where the bridge will go dark, but it should resume shining in January 2016 -- conveniently, just ahead of the influx of tourists attending Super Bowl 50. Not all San Franciscans are fans of the installation (they argue that it's out of sync with the region), but these LEDs are here to stay.

In this article: art, baybridge, bridge, illuminatethearts, led, light, lighting, lights, sanfrancisco, transportation
All products recommended by Engadget are selected by our editorial team, independent of our parent company. Some of our stories include affiliate links. If you buy something through one of these links, we may earn an affiliate commission.