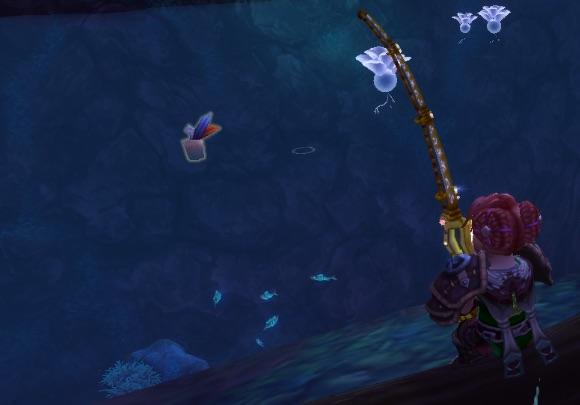 Virtual fishing may not seem like the most exciting thing to do with your in-game time, but it can be a useful profession to have. And in Warlords of Draenor, even if you've never picked up fishing before, you'll find it's been streamlined to make it easier to level. Fishing in Draenor is also the path to the water-walking mount Crimson Water Strider and the unique Land Shark pet (as well as a number of other unique pets and mounts if you decide to trek back through older content). Plus, fishing can help you quickly advance cooking and first aid (with which you can create handy Healing Tonics)... and even make some decent gold on the side by selling fish to everyone who thinks fishing is too time-consuming to bother with.

Still, the profession does have its downsides. Because there are three sizes of fish, multiple kinds of fish-specific bait, fish flesh, and plenty of miscellaneous extras you can fish up, fishing can take up a lot of space in your bags -- we wouldn't recommend going on an extended fishing trip without an empty bag to hold everything you fish up. Also, it's definitely not excitement central, which can put a lot of people off. But in our opinion, it's an excellent task to work on while catching up on social networks or watching TV, because you can turn up ambient sounds (i.e. the splash of your fishing lure) and mostly ignore the game -- just clicking to pick up your catch and throw your line out again.

And did we mention how useful fishing can be? And the amazing Land Shark? Focus on that!

Have you got your heart set on leveling fishing and unlocking the level 3 Fishing Shack to give you access to all of the fishing fun Draenor has to offer? Read on for how to get started, no matter what your skill level is.

I've never fished before. Where do I get started?
If you've never even trained fishing, you'll want to start by heading to a trainer in one of the capitol cities -- there aren't any trainers on Draenor, so you'll have to go back to Azeroth for this one. Ask a city guard to direct you towards fishing trainers if you don't know where they are and train the first level of fishing. While you're here, pick up a fishing pole, too -- if there's not a vendor by the fishing trainer, you'll find basic fishing poles on general goods vendors. Though you don't technically need a fishing pole to fish, most poles will improve your skill which increases your likelihood of catching good fish, so you'll want to have one equipped to make the most of your fishing time. (Yes, there are lots of better fishing poles out there, but this will get you started.)

Next, head back to Draenor. Even at level 1 skill, you'll be able to cast anywhere... though you're not going to catch anything exciting just yet. Find some costal water (ideally a spot away from any hostile monsters), equip your fishing pole, drag your fishing ability (you'll find it on your professions panel) to an easily-accessed toolbar (or bind it to a hotkey if you're so inclined), and click to cast your line. You'll see a progress meter pop up on your screen and you may or may not catch anything before it runs out -- especially at low skill levels.

When you do catch something, you'll see your fishing bobber sink under the water and hear a distinctive splashing sound. Click on your bobber to grab whatever you've caught and then cast again to start the process over.

Eventually, you'll wind up fishing up the Fishing Guide to Draenor, which will boost your maximum skill level to 700 when learned. After that, just keep fishing -- once you've picked up your guide, you can move to your garrison which can be easier, especially on PvP realms -- to keep skilling up.

Fishing in Draenor
You'll find different fish in different parts of Draenor. Here's what there is to catch:Each of these fish comes in three sizes: small (which you'll get from 0 to 700 skill), regular (which you can start seeing as early as level 100 skill), and enormous (which you'll start seeing at 650 skill). The better your skill, the more likely you are to catch larger sizes of fish. In Draenor, instead of the fish itself being a reagent for cooking and other professions, you'll need to fillet your fish to do anything with them -- to fillet, you'll need 20 small fish, 10 regular fish, or 5 enormous fish... so you can see why catching larger fish sizes is lucrative.

To help catch more of what you want, you'll want to use any +fishing gear you have -- which you might fish up or acquire from fishing-related quests. You'll also want to use bait and lures. You'll find generic lures which improve your fishing skill on vendors or simply by fishing while you'll get fish-specific bait for Draenor fish by fishing in the areas where those fish are found. You can use both a lure and a bait to maximize your chances of catching what you want -- and our advice is to always use both lure and bait. Just by fishing, you'll find you wind up with plenty of both, so why waste fishing time? Use these items to maximize your catch chances.

However, no matter what your skill level or what kind of bait you're using, you can only catch fish in the areas in which they spawn -- so, for example, even using Fire Ammonite bait, you won't find Fire Ammonite outside of Frostfire Ridge lava. Unlocking the fishing shack
Your garrison's fishing shack plays a big role in Warlords of Draenor. You can initially unlock it at level 94, though you'll have to have your garrison at level 2 to be able to do the required quest chain (Looking For Help Alliance / Looking For Help Horde). Plans for the level 2 fishing shack can simply be bought, while plans for the level 3 fishing shack require significant effort (and fishing) to unlock. Specifically, the level 3 blueprints will require you to get the Draenor Angler meta-achievement, which requires you to catch 100 enormous-size of 7 different types of fish. Yes, that's a pretty daunting task -- and you'll need to get your skill level fairly high to get started on it -- but those 700 fish (no, that's not a typo) go by faster than you might think.

You'll want to get -- and level -- your fishing shack as soon as possible, because each level of fishing shack allows you to catch larger fish in your garrison's pond -- plus at level 3, you can recruit famed fisherman Nat Pagle to hang out in your garrison. Having Nat on-hand will let you catch lunkers in Draenor, which will in turn help you earn reputation with Nat and buy special items like the Land Shark and Water Strider. To recruit Nat, follow the quest chain in your level 3 fishing shack or consult El's Extreme Anglin' for a complete guide.

Making fishing easier
Going from fishing level 1 to fishing level 700 is time-consuming... but there are ways to make it easier on yourself. The simplest tip is to use in-game sound to your advantage: by turning on (or up) ambient sound and turning off all other sound, you'll have an audible cue when you've caught a fish, which can make it easier to tell even without staring at your fishing bobber.

The add-on Fishing Buddy is also highly recommended. It not only streamlines the fishing process -- like letting you click the water to cast -- but it also keeps track of what you've caught where, which makes it easy to immediately tell what you're likely to catch when you cast. We can't recommend fishing without it.

You'll also find fishing dailies in your garrison which offer a skill point and some handy fishing gear. These can be helpful whether you're leveling fishing or not, though they do require a bit of running around. If you feel even more ambitious, you'll find there are fishing dailies in each expansion -- and if you work on Anglers reputation in Pandaria, you can increase your reputation with Nat, which carries over to Draenor content.