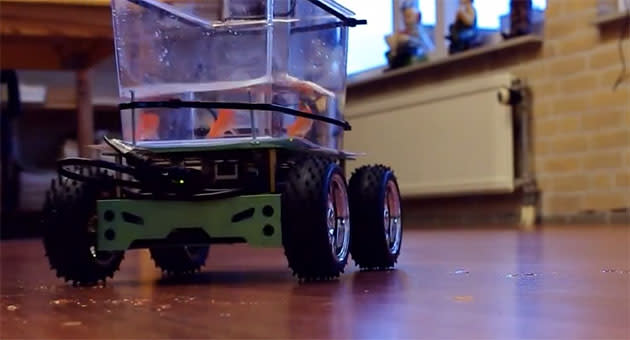 A company called Studio Diip has created a motorized go-cart. For fish. Though "why" is the first question that comes to mind, at this point we're only able to give you the "how." When Little Dory starts to swim in a particular direction, her movement is captured by a top-mounted web cam, processed by a Beagleboard and used to steer the Arduino-controlled carriage under her bowl. As seen in the video after the fold, that lets her follow her muse outside the aquarium's confines. We're hoping this experiment makes it beyond the lab one day, as we're pretty damned curious to see where a fish wants to go. ("Away from the cat" or "towards the ocean" seem like safe bets.)

In this article: arduino, beagleboard, FishOnWheels, petmobility, self-driving, webcam
All products recommended by Engadget are selected by our editorial team, independent of our parent company. Some of our stories include affiliate links. If you buy something through one of these links, we may earn an affiliate commission.