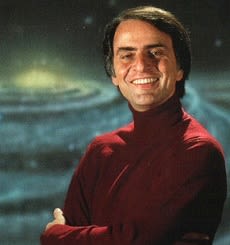 In the early 90s, Apple began working on the Power Mac 7100, a product that was internally given the codename "Carl Sagan." The impetus behind the codename was a riff on Sagan's catchphrase "billions and billions", the implication being that the 7100 would go on to make Apple billions of dollars.

Concurrently, Apple was also developing two other Power Mac computers codenamed Piltdown Man and Cold Fusion, the former being a reference to a notorious scientific hoax and the latter being a discredited type of nuclear reaction.

When these internal codenames were first revealed in a 1993 issue of MacWeek, Sagan was concerned that the use of his name might be misconstrued as an official endorsement. Some also speculate that Sagan was not keen on having his name being associated with two prominent examples of pseudo-science.

In January of 1994, Sagan wrote the following letter to MacWeek:

I have been approached many times over the past two decades by individuals and corporations seeking to use my name and/or likeness for commercial purposes. I have always declined, no matter how lucrative the offer or how important the corporation. My endorsement is not for sale.

For this reason, I was profoundly distressed to see your lead front-page story "Trio of Power PC Macs spring toward March release date" proclaiming Apple's announcement of a new Mac bearing my name. That this was done without my authorization or knowledge is especially disturbing. Through my attorneys, I have repeatedly requested Apple to make a public clarification that I knew nothing of its intention to capitalize on my reputation in introducing this product, that I derived no benefit, financial or otherwise, from its doing so. Apple has refused. I would appreciate it if you so apprise your readership.

In the wake of Sagan's letter, Apple changed the codename of the Power Mac 7100 to "BHA", a string which stood for "Butt-Head Astronomer."

When Sagan became aware of this, he decided to sue Apple for libel.

That this dispute even went to court in the first place is beyond comical. Just imagine Apple arguing, as it did, that the phrase "Butt-Head Astronomer" doesn't constitute libel because it's merely the expression of an opinion that no one would misconstrue as fact.

Not surprisingly, the case was dismissed just as quickly as it was brought.

The court ruling reads in part:

There can be no question that the use of the figurative term "Butt-Head" negates the impression that Defendant was seriously implying an assertion of fact. It strains reason to conclude that Defendant was attempting to criticize Plaintiff's reputation or competency as an astronomer. One does not seriously attack the expertise of a scientist using the undefined phrase "butt-head."

Following this legal defeat, Sagan sued Apple yet again, this time for using his name at all in the first place. Apple emerged victorious once more, prompting Sagan to appeal the decision. Presumably not wanting to engage Sagan in a string of legal proceedings, Apple and Sagan in November of 1995 were ultimately able to reach a confidential settlement agreement out of court, with Apple apologizing for any unintended stress it caused the famed astronomer.

In a statement on the matter, Apple's patent director at the time, one Paul D. Carmichael, said:

Dr. Sagan has made great contributions in many areas of higher learning and in particular has made complex subject matter interesting and understandable to a wide audience. Apple has always had great respect for Dr. Sagan, and it was never Apple's intention to cause Dr. Sagan or his family any embarrassment or concern.

The engineers at Apple, though, weren't going to go down without some sort of fight. As such, the final codename for the Power Mac 7100 was "LAW", a string which stood for 'Lawyers are Wimps."

As an epilogue to this somewhat bizarre story, the Power Mac 7100 debuted in March of 1994 but never went on to generate billions and billions of dollars for Apple.

In this article: apple history, carl sagan, legal, power mac
All products recommended by Engadget are selected by our editorial team, independent of our parent company. Some of our stories include affiliate links. If you buy something through one of these links, we may earn an affiliate commission.