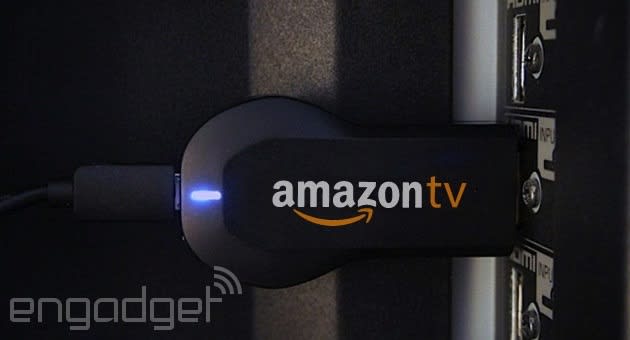 We've been hearing rumblings about Amazon's set top box plans for quite a while now, and according to the folks over at TechCrunch, that gadget more closely resembles Google's Chromecast. The possibility of a USB-style product should come as no surprise given the popularity of the aforementioned $35 option and Roku's recent release. In addition to the dongle form factor, the report also suggests that the device will feature support for streaming PC games in order to compete with the likes of Xbox, PlayStation and Steam for all types of living room content consumption. The gaming aspect is said to closely resemble a service like OnLive, which allows cloud-based streaming. Details are scare in terms of titles, but the library has been tipped to include "top-tier games" beamed from Amazon at 30fps. This reported union of the online retailer's set top and console plans comes just days after a controller broke from cover and weeks out from a report that gaming plans were alive and well.

Update: The Wall Street Journal reports from its anonymous sources that the device could go on sale as early as next month. Besides the early April ship date, other possibilities include selling it through other retailers too, like Best Buy and Staples, and that it would pack in a simple remote with the advanced controller as a separate option.

Source: TechCrunch, Wall Street Journal
In this article: amazon, dongle, gaming, hdpostcross, rumor, set-top box
All products recommended by Engadget are selected by our editorial team, independent of our parent company. Some of our stories include affiliate links. If you buy something through one of these links, we may earn an affiliate commission.