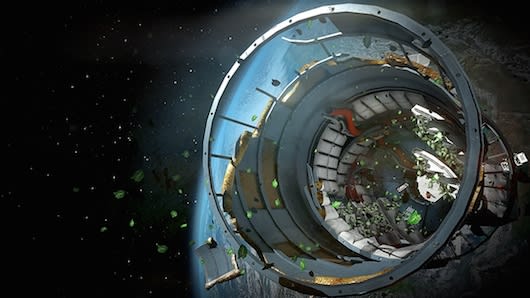 Developer Three One Zero's first-person hardship simulator in space, Adrift, sounds less than forgiving. Unlike its protagonist however, Three One Zero will have company in the form of publisher 505 Games when Adrift launches into orbit in mid-2015, both on PC and to-be-determined consoles.

With no memory, a damaged suit and the surrounding clutter of a space station's remains, Adrift's protagonist doesn't have a ton of leisure time. In their push to fix an escape vehicle and return to Earth, players will guide their astronaut's gathering of resources and their search for clues to what caused the former shelter's demise. Players will also lead their character through the act of not dying in space.

ADR1FT is an immersive First Person Experience (FPX) that tells the story of an astronaut in peril. Floating silently amongst the wreckage of a destroyed space station with no memory and a severely damaged EVA suit, the only survivor struggles to determine the cause of the catastrophic event that took the lives of everyone on board. The player fights to stay alive by exploring the wreckage for precious resources, and overcomes the challenges of an unforgiving environment to repair the damaged emergency escape vehicle and safely return home.

"The Three One Zero team epitomizes the tremendous passion and creativity of independent game development," said Ian Howe, president, 505 Games. "I've wanted to publish ADR1FT from the moment I first saw it at DICE; we're looking forward to working with Three One Zero to deliver a bold new gaming experience to all types of players."

Three One Zero is being led by founders Adam Orth on the creative side and Omar Aziz on the technology side. At its core, ADR1FT is an emotional journey through action, consequence and redemption. In the end, the player will be left to contemplate the parallels between the choices he makes within the game and the ones he makes in real life.

"I'm very happy to be partnering with 505 Games for ADR1FT," said Orth. "From the very beginning, Ian Howe and his team have passionately understood the game Omar and I are trying to make. They have empowered us with the freedom to explore and create something special with ADR1FT, both traditionally and with VR technology. It's clear from games like Payday 2, Brothers: A Tale of Two Sons and some of their upcoming titles that 505 is not afraid to take chances and give gamers something fresh and new. That's important to us. That's what we're all about. We're excited to be part of that."

505 Games is a global video game publisher focused on offering a broad selection of titles for players of all ages and levels. The company publishes games on leading console and handheld platforms as well as for mobile devices and social networks. Product highlights include, Sniper Elite V2, PAYDAY 2, Brothers – A Tale of Two Sons, Terraria, How To Survive, Tiny Brains, and the upcoming Sniper Elite 3 and Defense Grid 2.

505 Games has offices in Los Angeles, Milton Keynes, UK, Lyon, Munich, Milan and Madrid and a network of distribution partners within the Nordic territories and Australia. For more information on 505 Games and its products please visit www.505games.com.

About Three One Zero

Founded by Adam Orth and Omar Aziz in Santa Monica, CA, Three One Zero is an independent video game and interactive entertainment development studio dedicated to creating original, story-driven, immersive and high-quality FPX and VR experiences. For more information on Three One Zero, please visit www.threeonezero.com.
In this article: 505-games, adam-orth, adrift, pc, three-one-zero
All products recommended by Engadget are selected by our editorial team, independent of our parent company. Some of our stories include affiliate links. If you buy something through one of these links, we may earn an affiliate commission.