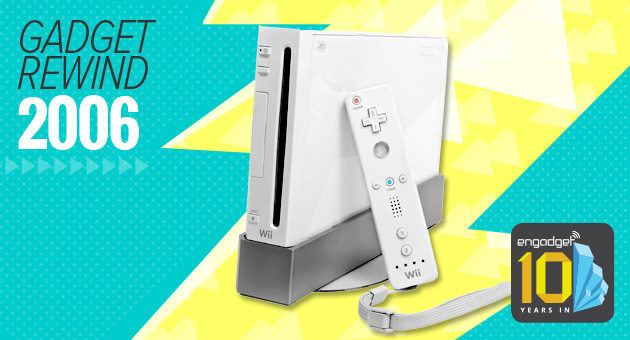 Nintendo planned a "Revolution" for your TV. When it arrived in 2006, it was a lot more fun than the confrontational term might imply. Revolution turned out to be the code name for the company's new console, and just before E3 that year Nintendo ditched the subterfuge and unveiled its official title: Nintendo Wii. It was revolutionary, using motion-tracking remotes to get players off the couch and involved in the action. The Wii rapidly became the centerpiece at parties, stepping into the arena with classics like Pictionary and charades. The console's popularity was also a welcome turnabout for Nintendo, which had been languishing over its latest console's missteps.

When the Nintendo Wii launched in late 2006, it made the holiday deadline, but also ended up in head-to-head competition with Sony's PlayStation 3. While the PS3 and Xbox 360 offered higher-resolution games and more complex titles, they didn't really have the motion-tracking magic that Nintendo brought to the table. At least not until 2010, when Sony's PS Move and Microsoft's Kinect appeared on the scene.

The Wii's success was about accessibility. Nintendo games like Wii Sports -- wisely bundled with the console -- and WarioWare showcased the system's uniquely intuitive controller. Players got to act out their favorite sports: swinging the remote around like a baseball bat, golf club or bowling ball. Even mundane activities like cooking could be transformed into hours of enjoyment through the Wii. Sadly, third-party game studios never quite figured out how to mirror the success of Nintendo's first-party. As a result, few third-party games were sold on the Wii, which led most studios to give up on supporting the system.

Even though the console was an enormous hit, Nintendo decided that it would have to evolve in order to compete with emerging trends. In late 2012, Nintendo launched the Wii's successor with a slightly tweaked moniker: Wii U. Its GamePad controller was aimed at challenging tablet gaming and providing a "second screen" experience. Unfortunately, the launch left many confused. With such a subtle name change, it was often misinterpreted as an add-on for the existing Wii system -- which it wasn't.

Just like life, Nintendo's consoles seem to have lots of ups and downs, at least in terms of market success. The Wii was definitely a high point in its history of gaming systems. It sold over 24 million units by its second year and surpassed 100 million units in its lifetime. The impact of that system even served to inform future consoles of competing brands. The mainstream affinity for Wii Sports led to developments like Wii Fit and its Balance Board accessory, which took things a step further by adding fitness tracking and exercise programs into the mix. The living room could now serve double duty as a gym, and children (as well as adults) no longer needed to suffer the oppressive nature of "going outside" just to get some exercise.

Did you own a Nintendo Wii? Add it to your Engadget profile as a device you had (or still have) and join the discussion to reminisce or share photos of your device with other like-minded gadget fans.
In this article: 10yearsin, atari, av, console gaming, gadget rewind, gadgetrewind, hdpostcross, mobile, mobilepostcross, nintendo, nintendo wii, nintendo wii u, video game crash, wavebird, wii u
All products recommended by Engadget are selected by our editorial team, independent of our parent company. Some of our stories include affiliate links. If you buy something through one of these links, we may earn an affiliate commission.