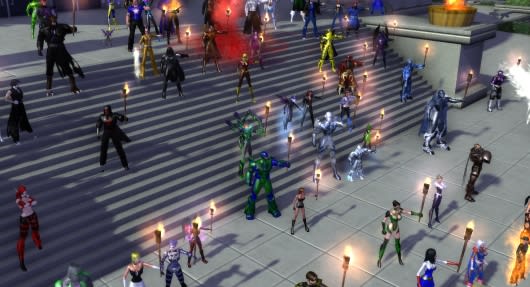 There's good news for City of Heroes fans to celebrate now, even if it's not a finished thing yet. Nate Downes, President of Missing Worlds Media, has posted about a project wholly unrelated to City of Titans and yet entirely tied to it: the quest to resurrect the City of Heroes IP. He explains a story that began in September of last year, starting with a few contacts within NCsoft who led to the ultimate goal of resurrecting the last version of the game as well as licensing out the IP to its spiritual successors.

The proposal currently on the table before NCsoft would allow the game's spiritual successors to drop the "spiritual" portion of their title, enable a restoration of the game's servers for the last update (albeit with no saved character data), and create the potential for a "transition" server between the original game and its successors. While it's far from a done deal, it's the best news that the former residents of Paragon City have heard since the lights went dark -- there may be brightness on the horizon.
Source: And the mask comes off
In this article: business, business-arrangements, city-of-heroes, city-of-titans, city-of-villains, coh, cot, cov, cox, culture, f2p, free-to-play, freedom, intellectual-property, ip, missing-worlds, missing-worlds-media, mmo-industry, nate-downes, ncsoft, news, news-items, paragon, paragon-studios, resurrection, superhero, superheroes
All products recommended by Engadget are selected by our editorial team, independent of our parent company. Some of our stories include affiliate links. If you buy something through one of these links, we may earn an affiliate commission.