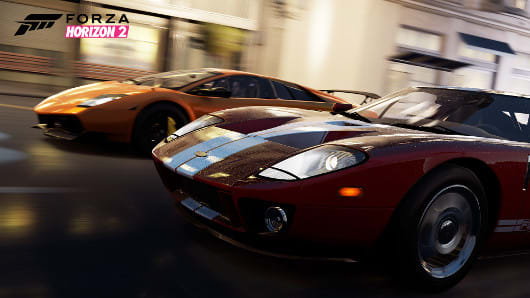 Forza Horizon 2 is the kind of racing game that expands the idea of 'simulation' to include less material, more ambiguous parts of driving. What it feels like to zoom along the breezy coast in a lovely LaFerrari. The cringe of your beastly Nissan GT-R scraping through a tight turn in the castle town of San Giovanni. Inhaling for your Ford Raptor as it squeezes through a green gauntlet of fir trees. Oh, and what it's like being a rich generi-dude who identifies every techno song on the radio as an 'anthem.'

The finest quality in Forza Horizon 2 is that it inspires a sort of role-playing, none of which is – or needs to be – explicitly acknowledged. But I did turn into that guy: that intolerable guy who drove through Forza's massive chunk of Italy and France in a roaring Bentley made of pure gold. That guy who spent much of his time in a nu-disco haze, bopping his head to the radio on a road trip through Europe and its lush vineyards – perhaps better labeled as drive-through wineries.

Going off the road just about anywhere and bouncing over the hills in a skull-shaking first-person view reveals Forza Horizon 2's dirty, combusting heart. It also shows the game to have a beautiful balance of direction and aimlessness, a valuable quality even in games that aren't about cars.

The gorgeous open world lets you engage with Horizon 2's championships and other challenges with as much intensity as you like. There's enough room to cut corners, coast downhill and imprint your own love of driving as you go. I enjoyed the unhurried drives between races so much that I never ever bothered using fast travel (which is just as well, because it requires some in-game currency).

Though Forza Horizon 2 can't give you an XP bonus for successfully evoking nostalgia on a rain-soaked and forgotten road, there's lots to do deliberately within its enticing structure. For the most part, you're in a pleasant loop of buying a car and driving to a hub town, getting a feel for its handling and for the other competitors driving with you in the Horizon Festival. Once you reach the hub, the game automatically carves out car-relevant circuits, cross-country jaunts and point-to-point races from the vast network of local roads. You can even speak to your GPS (via Kinect) and have her direct you to the nearest starting point, or the next hub and set of championship races.

The calm drives and smashing races take you through a great variety of towns, valleys and slippery dirt roads, through day and night, sun and rain. Just as my Bentley and I would get tired of glistening through tight city circuits with an ocean view, the game would catapult our pack of racers through a spacious aerodrome with ease. Forza Horizon 2 also rewards committed participation with fancy showcase events, sending you racing after hot air balloons and blustering cargo planes. There's an element of showmanship to these races, which once again affirms Horizon's desire to impart more than just top-notch driving.

That isn't to say the game abandons Forza Motorsport's tougher tests of driving skill. Forza Horizon 2 feels more forgiving overall, in the sense that roads are more like suggestions than imperatives, but eliminating driving aids and amping up the AI difficulty puts every race in sharp concentration. Racing is ultimately about following rules and efficient lines through a track ... and then knowing when to briefly toss those rules out the window. It's knowing when to be the absolute last person to brake through a corner, praying to move up in the metallic cluster before the last lap. These decisions become an acute source of terror when you're also in a low-slung Lamborghini and your shuddering view is mainly taken up by vegetation. 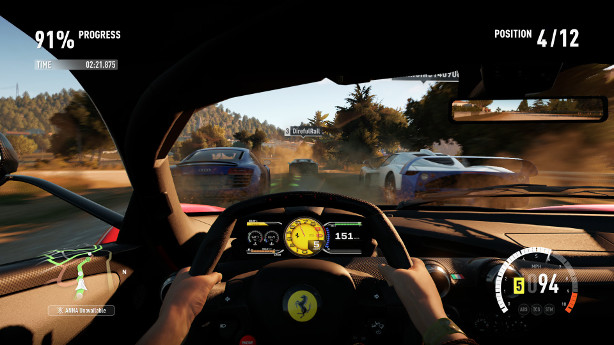 Forza 5's Drivatar system – yes, it's still called that – now reigns in Europe, with uploaded computer-controlled drivers supposedly mimicking their real-life player counterparts on the road. Evil cloud people seem incredibly aggressive in their new venue, often unaware of the spaces you occupy next to them, but at least their lack of predictability keeps things rougher than a boring pack of racing-line drones. Provided you're in a race, that is.

In races, they're usually a good mix of bad sports, but in the open world they're, to put it kindly, self-centered psychopaths. You might as well be invisible to them. They'll collide with you head-on when they overtake from the opposite direction, get stuck on walls and smash into you at intersections. They're gargantuan jerks, is what I'm saying, and this is from someone driving A BENTLEY MADE OF GOLD.

I'll admit that disturbances created by mad Drivatars are small in the full scope of Forza Horizon 2 (and certainly in the thousands of kilometers I've driven), and that I'm conflicted about them in general. If their goal is to introduce human-like behavior in racing, they've succeeded – after all, when have I not driven like a lunatic in an open-world game? Perhaps some policing is what's missing, and I don't mean cops chasing you on the road. 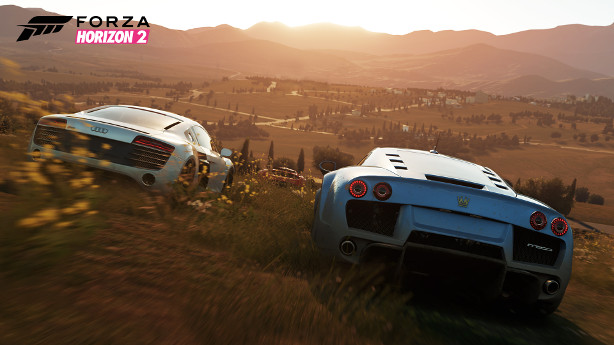 The uncouth race of Drivatars is one of a few issues that don't have some kind of balance in Forza Horizon 2. The music choices, for example, tend to veer deeply into clubby territory, but there's a good selection of radio categories and a nice nod to classical music. Meanwhile, Horizon's troupe leader and announcer, played by actor Sean Maguire, is a being composed entirely of smugness. As if consoling players reaching for the mute button, the developers have wisely put his face on the hidden boards you have to smash for points. (As an additional weight against him, it would have been nice to have the option to drive as a generi-girl, too.)

Points and your overall progression are elegantly brought forward in Forza Horizon 2, which has a non-invasive (and cost-free) way of offering you activities beyond racing championships. You might pursue the ten barns hidden across the map, for example, finding a classic car in desperate need of restoration. It's just a collectible, but it gives the game a sense of time, and nearly tangible comparisons between your new Mustang and, say, a formerly dilapidated Jag.

The game also has a big Bucket List of things to do, manifesting as timing or driving challenges with specific cars. The easy ones tend to convey a cherished dream, like driving a classic Ferrari along the Italian coast, while the hard ones dole out harsh time trials with monsters that are hard to steer. Some incur too many retries to be worth the effort, but I love the idea of a bucket list anyway – instead of proclaiming to dominate your life for all time, the developers at Playground Games have thought of things you must do before you inevitably leave their game. 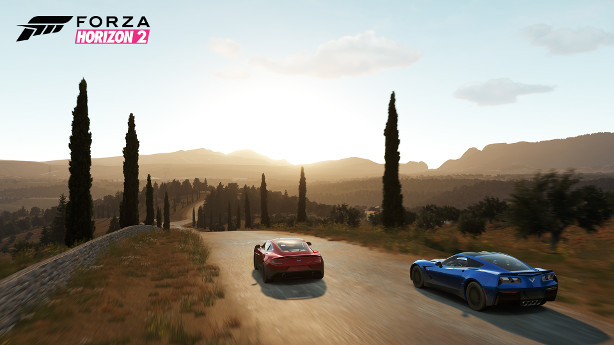 If Forza Horizon 2 has a philosophy, then, it's that you're free to dig in as far as you want. That doesn't speak to the amount of content you consume, per se, but the level of personal dedication you want to apply. If you just feel like having a fun drive along a pretty road with Chvrches playing on the radio, go ahead and do it. When you're ready to bump into big trucks in the rain, staring at your screen without blinking, there'll be a suitable championship or multiplayer roadtrip for you on the next stop. There's more to the feel of driving in Forza Horizon 2 than what the post-race screen says.

Forza Horizon 2's world isn't the most lively, beset as it is by roaming bands of automotive enthusiasts, but it leaves room for the living – for you. There's space enough to imprint your moods, whether you rocket into hairpins with a Ferrari or simply cruise around in a gaudy, gold Bentley. Forza Horizon 2 is a big, bouncy summer drive.

This review is based on an approved Xbox Live download of the Xbox One version of Forza Horizon 2, provided by Microsoft.

Joystiq's review scores are based on a scale of whether the game in question is worth your time -- a five-star being a definitive "yes," and a one-star being a definitive "no." Read here for more information on our ratings guidelines.
In this article: forza-horizon-2, microsoft, playground-games, Sumo-Digital, turn-10, turn-10-studios, xbox, xbox-one
All products recommended by Engadget are selected by our editorial team, independent of our parent company. Some of our stories include affiliate links. If you buy something through one of these links, we may earn an affiliate commission.