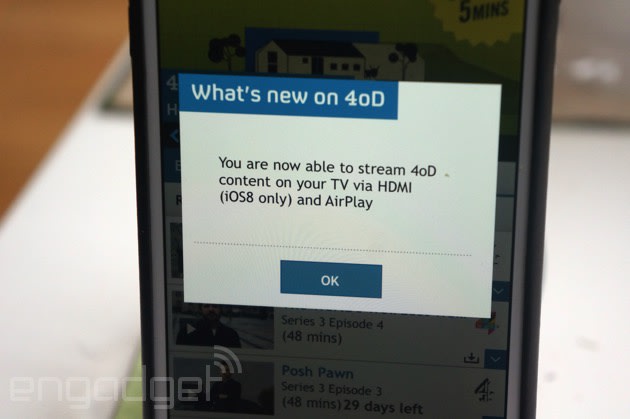 While Channel 4's 4oD streaming catch-up service will soon get a much-needed revamp, the broadcaster isn't shying away from keeping its current apps updated. In its latest round of iOS improvements, Channel 4 has added support for both HDMI output and Apple's AirPlay. That means you can now throw up shows like Gogglebox, Toast of London or The IT Crowd on the big screen, if you have the available hardware and you're running Apple's latest iOS software (for HDMI support) that is. Even if you don't, the 4oD already features cellular streaming and offline viewing, so you'll be able to catch-up on loads of content on the go.

Via: The Digital Lifestyle
Source: 4oD (App Store)
In this article: 4, 4od, airplay, apple, apple tv, channel, hdmi, mobilepostcross, uk-feature
All products recommended by Engadget are selected by our editorial team, independent of our parent company. Some of our stories include affiliate links. If you buy something through one of these links, we may earn an affiliate commission.