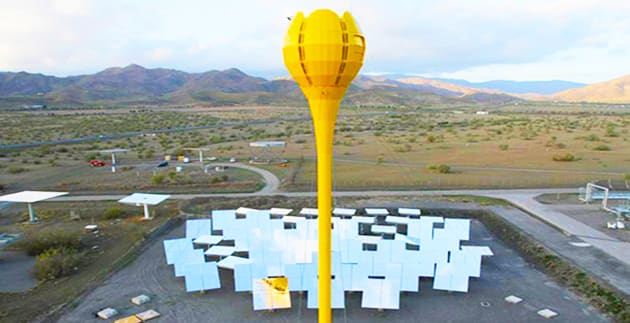 For many, the holidays are a time to spend lots of money on things that aren't so great for the environment. But it doesn't need to be that way! The friendly elves over at Inhabitat have rounded up some of the greenest holiday decorations and gifts to help you celebrate the season with a clear conscience. Instead of chopping down a tree, decorate your home with one of these 14 faux Christmas trees. And if you're looking for inspiration to make your own holiday tree, check out these sculptural Christmas trees made from bottles, bikes and shopping carts.

On the topic of faux trees, a group of Australian Lego geniuses recently erected the world's biggest Lego Christmas tree in Sydney -- a 33-foot, 3.5-ton behemoth. Once you've got your tree figured out, it's time to start thinking about lights. LEDs are far and away the most energy-efficient option, and here's a guide to the most festive LED strands for the holidays. You've put it off long enough: It's time to get some holiday shopping done. Inhabitat has you covered with a wide-ranging green holiday gift guide packed with over 200 items. The guide includes practical, eco-friendly gifts ranging from inexpensive items like rechargeable USB cell batteries and gorgeous beeswax candles to a glass bottle cutter that will impress even the most devoted DIYer.

Scotland is one of the world leaders in offshore wind energy production and hydroelectricity -- and all that renewable energy is really starting to make an impact. For the first time in the country's history, renewables represented the largest source of energy for the first half of 2014. Meanwhile, Ethiopia just announced plans to upgrade its energy grid with an amazing tulip-shaped solar plant. In other green energy news, Dubai's state utility company is driving solar prices down to record lows, bringing cheap, clean energy to the marketplace. A team of French engineers unveiled a sculptural tree-shaped wind turbine that is both silent and beautiful. The tree will be on display in Paris next spring. Tommy Hilfiger has designed a solar-powered field jacket that can charge your mobile devices on the go. Energy and waste management are two of the world's most pressing issues, and a Kenyan student has found a solution to both by converting sewage from his school's latrines into safe and clean cooking fuel. The 17-year-old is planning to build a Human Waste Bioreactor that will dispose of the school's waste and cut its cooking fuel costs in half. Also the topic of human waste, Inhabitat rounded up the top six uses for urine, from making furniture to producing energy. And a brilliant new invention seeks to address the global water crisis by using solar power to make seawater drinkable.

A couple years ago, MIT's Biomimetic Robotics Lab designed and built a robotic cheetah that could run faster than a human. The MIT team recently unleashed the robotic cheetah from the lab treadmill to let it run and jump around campus at up to 10 MPH. In other tech news, Code.Org is using Elsa and Anna from Frozen to teach young girls how to code. (There's also an Angry Birds coding tutorial for those kids who have moved beyond Anna and Elsa's snowy wonderland.) White T-shirts are magnets for stains -- but a new wearable technology could change that forever. Meet the world's first hydrophobic stain-proof shirt, and watch in awe as it repels beer, water and Sriracha with ease. NASA recently created the first-ever 3D-printed object in space at the International Space Station. The 3D printer was delivered to space in September, and its first act was a symbolic one: printing a faceplate that reads "Made in Space." And on the green architecture front, a team of architects and scientists unveiled a tiny glass house filled with natural light that they believe will increase happiness and well-being. To deal with privacy concerns, the home will come with a smartphone app that can darken walls at a moment's notice. And for doomsday-fearing billionaires out there, there's a bunker in Kansas just for you. A developer has transformed a former missile silo in rural Kansas into the Luxury Survival Condo complex. The underground units cost between $1.5 million and $3 million, and they come with perks like a spa, dog park and hydroponic vegetable gardens.

In this article: eco, environment, green, inhabitat, science
All products recommended by Engadget are selected by our editorial team, independent of our parent company. Some of our stories include affiliate links. If you buy something through one of these links, we may earn an affiliate commission.