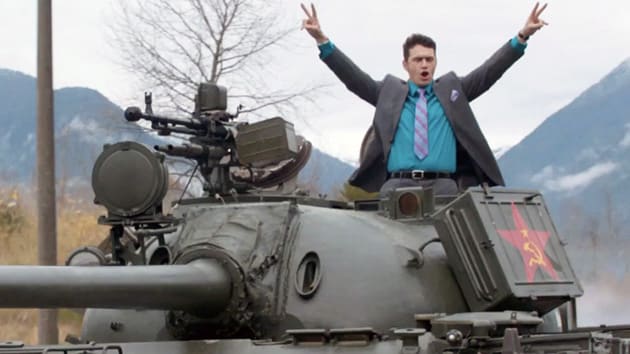 Sure, Sony may be defying hackers' threats by letting independent theaters screen The Interview, but you might not live close enough to watch the flick. What if you want to see it online? You might get that chance. Sources for both CNN and Recode claim that Google has "tentatively agreed" to distribute the movie online in rental form, both through Play Movies and YouTube; Sony would also stream the movie through its own website. There's a possibility that the Google deal will fall apart (this happened with iTunes, apparently), since distributors are reportedly worried that they'll face retaliatory hacks. If an agreement comes together, though, it would represent an important milestone -- it's not often that you see a major studio movie launch both online and in theaters at the same time. We've reached out to Google for details, and we'll let you know if there's anything official.

Update: Yep, it's happening. Sony will make the comedy available through a special page, Google Play, YouTube and Xbox Video starting today at 1PM Eastern. It'll cost $6 to rent, or $15 to own. A PlayStation Network release date, meanwhile, is coming "shortly." We're also gathering tweets from early reactions to the movie right here.

Update 2: And now The Interview has its first international premiere, as Google Canada just announced the movie is available on its outlets there too.


Hey Canada! You can now watch "The Interview" on @GooglePlay & @YouTube. http://t.co/jWqqSaFphN

Source: CNN, Recode, Official Google Blog
Coverage: AP (Twitter)
In this article: google, googleplay, googleplaymovies, hdpostcross, internet, movie, movies, northkorea, playmovies, poll, sony, sonypictures, streaming, theinterview, video, wedgies, youtube
All products recommended by Engadget are selected by our editorial team, independent of our parent company. Some of our stories include affiliate links. If you buy something through one of these links, we may earn an affiliate commission.