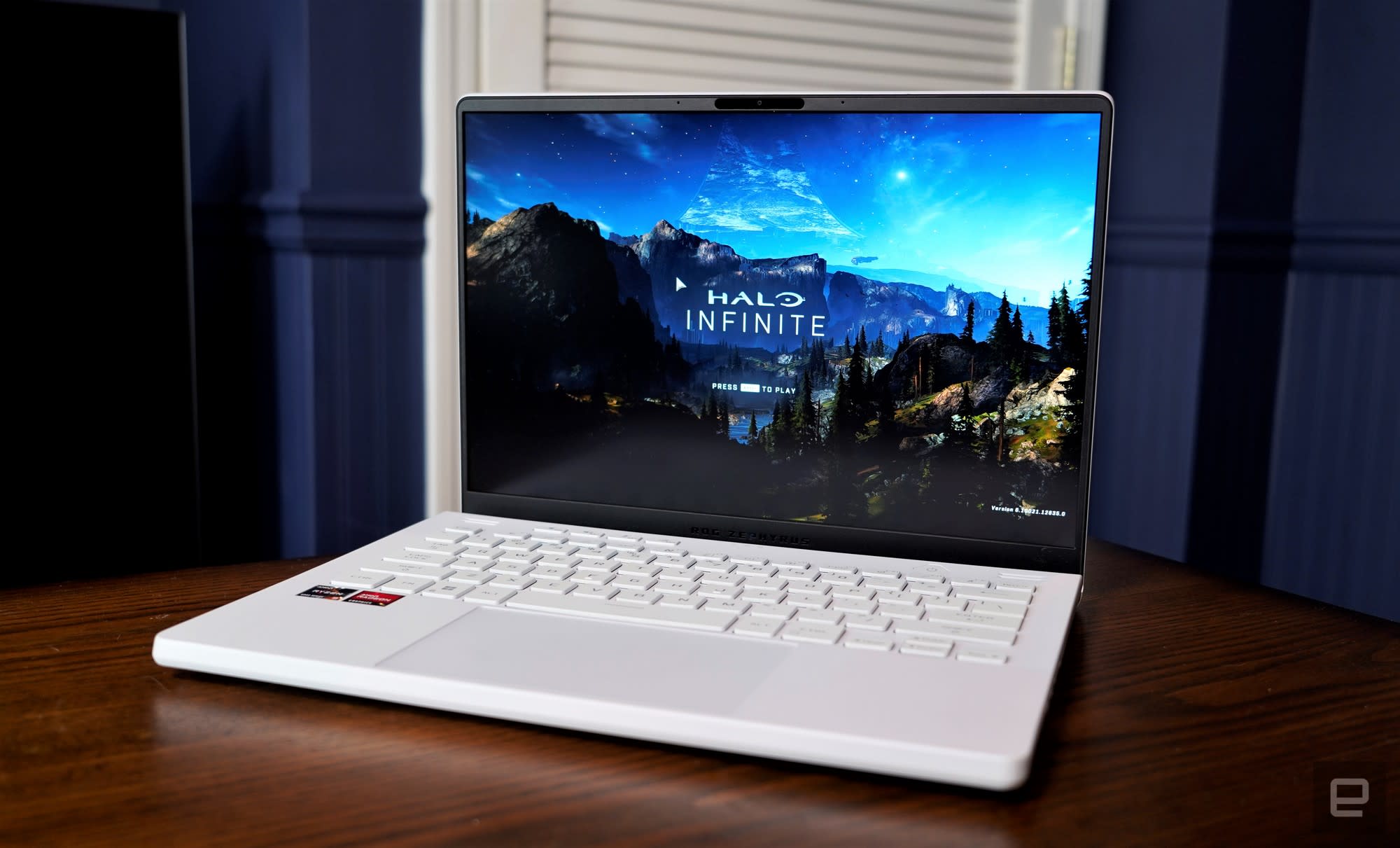 The best gaming laptops for 2022

So many choices, so many specs!

D. Hardawar
@devindra
November 30, 2022 3:45 PM
In this article: thebuyersguide, gear, gaming, evergreen, shopping, commerce, streamshopping, gaming laptops, ASUS, best tech, feature, Dell, Razer, Acer, holiday gifts
All products recommended by Engadget are selected by our editorial team, independent of our parent company. Some of our stories include affiliate links. If you buy something through one of these links, we may earn an affiliate commission. All prices are correct at the time of publishing.

For a few years now, gaming laptops have been some of the most intriguing PCs around. They’ve gotten thinner and lighter, naturally — but they’ve also become vastly more powerful and efficient, making them suitable for both work and play. They’ve adopted some bold innovations, like rotating hinges and near desktop-like customizability. Gaming laptops are where PC makers can get adventurous.

If you’re a professional in the market for a beefy new computer, and you like to play a few rounds of Apex Legends on occasion, it may make more sense to go for a gaming notebook instead of a MacBook Pro-like workstation. You’ll still get plenty of power for video encoding and 3D rendering, plus you may end up paying less. We'll help you figure out which is the best gaming laptop for you, from budget options like the Dell G15 to premium notebooks like the Razer Blade 15 and everything in between.

Your laptop buying journey starts and ends with the amount of money you're willing to spend. No surprise there. The good news: There are plenty of options for gamers of every budget. In particular, we're seeing some great PC gaming choices under $1,000, like Dell's G15 lineup. A cheap gaming laptop in this price range will definitely feel a bit flimsier than pricier models, and they'll likely skimp on RAM, storage and overall power. But they should be able to handle most games in 1080p at 60 frames per second, which is the bare minimum you'd want from any system.

Things get interesting when you start looking at the best laptops in the mid-range space, with prices at $1,000 and higher. At that point, you'll start finding PCs like the ASUS Zephyrus ROG G14, one of our favorite gaming notebooks. In general, you can look forward to far better build quality than budget laptops (metal cases!), improved graphics power and enough RAM and storage space to handle the most demanding games. These are the notebooks we'd recommend for most people, as they'll keep you gaming and working for years before you need to worry about an upgrade.

If you're willing to spend around $1,800 or more, you can start considering more premium options like Razer's Blade. Expect impeccably polished cases, the fastest hardware on the market, and ridiculously thin designs. The sky's the limit here: Alienware's uber customizable Area 51m is an enormous beast that can cost up to $4,700. Few people need a machine that pricey, but if you're a gamer with extra cash to burn, it may be worth taking a close look at some of these pricier systems.

What kind of CPU and GPU do you want?

The answer to this question used to be relatively simple: Just get an Intel chip with an NVIDIA GPU. But over the last few years, AMD came out swinging with its Ryzen notebook processors, which are better suited for juggling multiple tasks at once (like streaming to Twitch while blasting fools in Fortnite). Intel responded with its impressive 12th-gen chips, but it’s nice to have decent AMD alternatives available, especially since they’re often cheaper than comparable Intel models.

When it comes to video cards, though, AMD is still catching up. Its Radeon RX 6000M GPU has been a fantastic performer in notebooks like ASUS’s ROG Strix G15, but it still lags behind NVIDIA when it comes to newer features like ray tracing. But at least a Radeon-powered notebook ht can approach the general gaming performance of NVIDIA’s RTX 3070 and 3080 GPU.

If you want to future-proof your purchase, or you’re just eager to see how much better ray tracing can make your games look, you’re probably better off with an NVIDIA video card. They’re in far more systems, and it’s clear that NVIDIA has better optimized ray tracing technology. RTX GPUs also feature the company’s DLSS technology, which uses AI to upscale games to higher resolutions. That’ll let you play a game like Destiny 2 in 4K with faster frame rates. That’s useful if you’re trying to take advantage of a high refresh rate monitor.

NVIDIA’s RTX 3050 is a decent entry point, but we think you’d be better off with at least an RTX 3060 for solid 1080p and 1440p performance. The RTX 3070, meanwhile, is the best balance of price and gaming performance. It’ll be able to run many games in 4K with the help of DLSS, and it can even tackle demanding titles like Control. NVIDIA’s RTX 3080 and 3080 Ti are the king of the hill; you’ll pay a premium for any machine that includes them.

It’s worth noting that NVIDIA’s mobile GPUs aren’t directly comparable to its more powerful desktop hardware. PC makers can also tweak voltages to make it perform better in a thinner case. Basically, don’t be surprised if you see notebooks that perform very differently, even if they’re all equipped with the same GPU.

What kind of screen do you want?

Screen size is a good place to start when judging gaming notebooks. In general, 15-inch laptops will be the best balance of immersion and portability, while larger 17-inch models are heftier, but naturally give you more screen real estate. There are some 13-inch gaming notebooks, like the Razer Blade Stealth, but paradoxically you'll often end up paying more for those than slightly larger 15-inch options. We’re also seeing plenty of 14-inch options, like the Zephyrus G14 and Blade 14, which are generally beefier than 13-inch laptops while still being relatively portable.

But these days, there is plenty to consider beyond screen size. For one: refresh rates. Most monitors refresh their screens vertically 60 times per second, or at 60Hz. That's a standard in use since black and white NTSC TVs. But over the past few years, displays have evolved considerably. Now, 120Hz 1080p screens are the bare minimum you'd want in any gaming notebook — and there are faster 144Hz, 240Hz and even 360Hz panels. All of this is in the service of one thing: making everything on your display look as smooth as possible.

For games, higher refresh rates also help eliminate screen tearing and other artifacts that could get in the way of your frag fest. And for everything else, it just leads to a better viewing experience. Even scrolling a web page on a 120Hz or faster monitor is starkly different from a 60Hz screen. Instead of seeing a jittery wall of text and pictures, everything moves seamlessly, as if you're unwinding a glossy paper magazine. Going beyond 120Hz makes gameplay look even more responsive, which to some players gives them a slight advantage.

Not to make things more complicated, but you should also keep an eye out for NVIDIA's G-SYNC and AMD's FreeSync. They're both adaptive sync technologies that can match your screen's refresh rate with the framerate of your game. That also helps to reduce screen tearing and make gameplay smoother. Consider them nice bonuses on top of a high refresh rate monitor; they're not necessary, but they can still offer a slight visual improvement.

One more thing: Most of these suggestions are related to LCD screens, not OLEDs. While OLED makes a phenomenal choice for TVs, it's a bit more complicated when it comes to gaming laptops. They're mostly limited to 60Hz, though some models offer 90Hz. Still, you won’t see the smoothness of a 120Hz or 144Hz screen. OLEDs also typically come as 4K or 3.5K panels – you'll need a ton of GPU power to run games natively at that resolution. They look incredible, with the best black levels and contrast on the market, but we think most gamers would be better off with an LCD.

A few other takeaways:

If you can't tell by now, we really like the Zephyrus G14. It's shockingly compact, at just 3.5 pounds, and features AMD's new Ryzen chips paired together with its Radeon 6000M graphics (we’d recommend the Ryzen 9 model with an RX 6700M for $1,400). While its 14-inch screen is a bit smaller than our other recommendations, it looks great and features a fast 144Hz refresh rate. We also like its retro-future design (some configurations have tiny LEDs on its rear panel for extra flair). While the G14 has jumped in price since it debuted, it’s still one of the best gaming notebooks around, especially since ASUS has finally added a built-in webcam.

We've been fans of Dell's G5 line ever since it first appeared a few years ago. Now dubbed the G15, it starts at under $1,000 and features all of the latest hardware, like Intel's 12th-generation CPUs and NVIDIA's RTX 30-series cards. (You can also find AMD Ryzen chips in some models.) This budget gaming laptop is a bit heavy, weighing over five pounds, but it's a solid notebook otherwise. And you can even bring it into mid-range gaming territory if you spec up to the RTX 3060.

Razer continues to do a stellar job of delivering bleeding-edge hardware in a sleek package that would make Mac users jealous. The Blade 15 has just about everything you'd want, including NVIDIA's fastest mobile GPU, the RTX 3080 Ti, as well as Intel's 12th-gen CPUs and speedy quad-HD screens. Our recommendation? Consider the model with a Quad HD 165Hz screen and an RTX 3070 GPU for $2,050. You can easily save some cash by going for a cheaper notebook, but they won't feel nearly as polished as the Blade.

While we've seen some wilder concepts from Acer, like its 360-degree hinge-equipped Triton 900, the Triton 500 is a more affordable bread and butter option. This year, it’s bumped up to a 16-inch display, giving you more of an immersive gaming experience. It’s relatively thin, weighs just over five pounds, and it can be equipped with Intel's 11th-gen CPUs and NVIDIA's RTX 30-series GPUs. Acer's build quality is as sturdy as ever, and it has most of the standard features you’d need in a gaming notebook.

Take everything we loved about the Razer Blade 15, scale it up to a larger 17-inch screen, and you’re pretty much in gamer paradise. If you can live with its six-pound weight, the Blade 17 will deliver the most desktop-like gaming experience you can find in a notebook. It’s relatively slim, and it’s perfect for binging Netflix in bed. The Blade 17 is also a smart choice if you’re editing media, as its larger screen space makes it perfect for diving into larger timelines. It’s not for everyone, but sometimes you just have to go big or go home, right?

You know if you actually need a dual-screen laptop: Maybe a single 17-inch screen isn’t enough, or you want a mobile setup that’s closer to a multi-monitor desktop. If that’s the case, the Zephyrus Duo 16 is made for you. It’s powerful, and its extra 14-inch screen can easily let you multitask while dutifully working. It also has all of the latest hardware you’d want, like AMD’s new Ryzen chips and NVIDIA’s RTX 3000 GPUs. Sure, it’s nowhere near portable, but a true multitasker won’t mind.