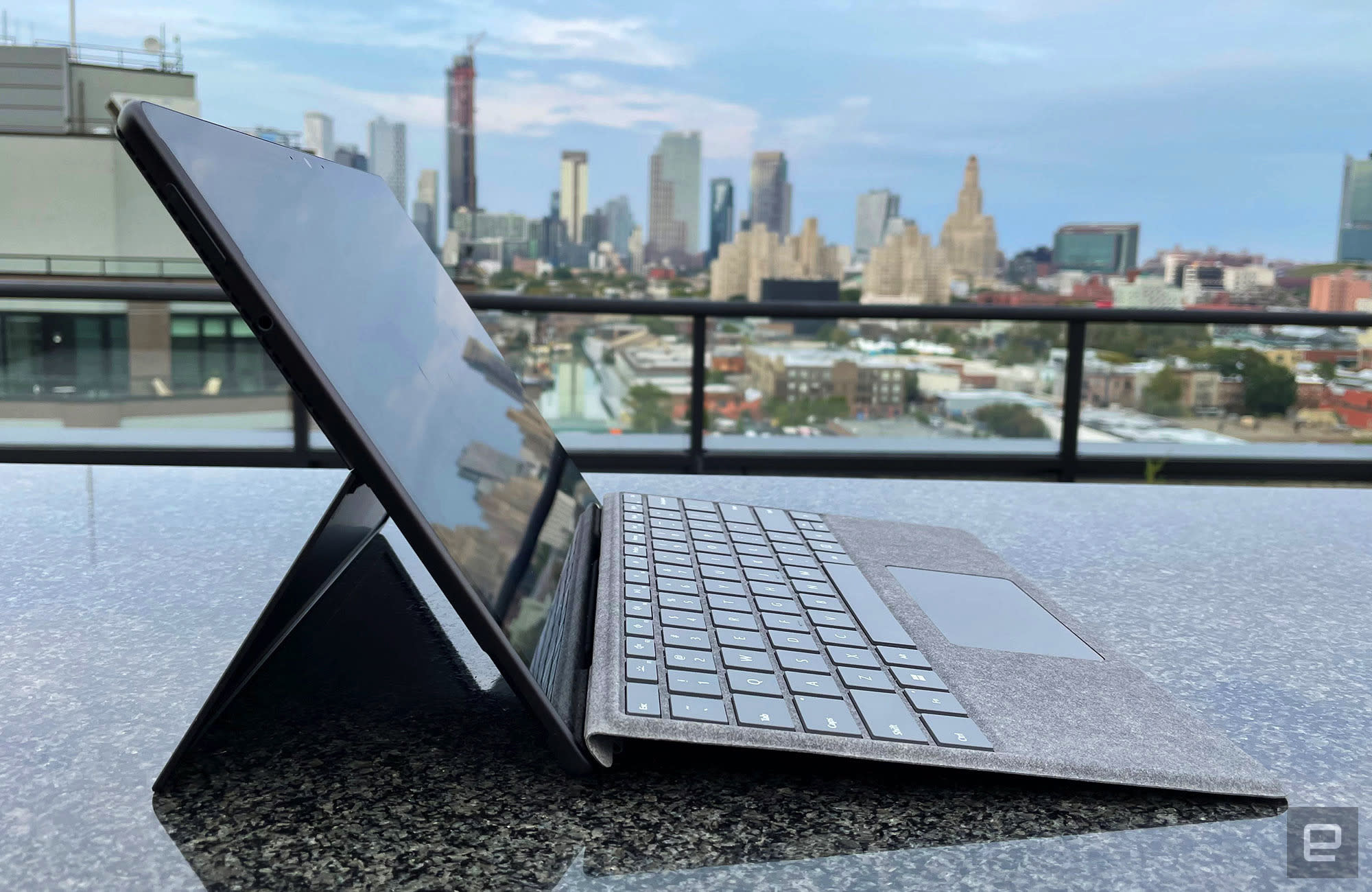 These are our favorite hybrid machines.

C. Low
@cherlynnlow
December 1st, 2021
In this article: thebuyersguide, gear, ipad, 2-in-1, pc, microsoft, tablet, commerce, apple, samsung, HP, best tech, feature, laptop
All products recommended by Engadget are selected by our editorial team, independent of our parent company. Some of our stories include affiliate links. If you buy something through one of these links, we may earn an affiliate commission.

The perfect hybrid machine that’s just as good a tablet as it is a laptop still doesn’t exist. But, in 2021, companies like Microsoft, Apple and Google continued to improve their operating systems for machines that do double duty. Windows 11 has features that make it friendlier for multi-screen devices, while Android 12L is on the horizon and promises an optimized experience for larger displays. Plus, with the rise of ARM-based chips for laptops, especially Apple’s impressive M1 series, prospects for a powerful 2-in-1 with a vast touch-friendly app ecosystem is at an all-time high.

These machines still have their limits, of course. Since they’re smaller than proper laptops, they tend to have less-powerful processors. Keyboards also tend to be less sturdy, with condensed layouts and shallower key travel. Plus, they’re almost always tablets first, leaving you to buy a keyboard case separately. (And those ain’t cheap.) So, you can’t always assume the advertised price is what you’ll actually spend on the 2-in-1 you want.

Sometimes, getting a third-party keyboard might be just as good, and they’re often cheaper than first-party offerings. If you’re looking to save some money, Logitech’s Slim Folio is a cheaper option, and if you don’t need your keyboard to attach to your tablet, Logitech’s K780 Multi-Device wireless keyboard is also a good pick.

While we’ve typically made sure to include a budget 2-in-1 in previous years, this time there isn’t a great choice. We would usually go with a Surface Go, but the 2021 model is too expensive. Other alternatives, like cheaper Android tablets, are underpowered and don’t offer a great multitasking interface. If you want something around $500 that’s thin, lightweight and long-lasting, you’re better off this year looking at a conventional laptop (like those on our best budget PCs list).

When you’re shopping for a 2-in-1, there are some basic criteria to keep in mind. First, look at the spec sheet to see how heavy the tablet is (alone, and with the keyboard). Most modern hybrids weigh less than 2 pounds, with the 1.96-pound Surface Pro 8 being one of the heaviest around. The iPad Pro 12.9 (2021) and Samsung’s Galaxy Tab S7+ are both slightly lighter. If the overall weight of the tablet and its keyboard come close to 3 pounds, you’ll be better off just getting an ultraportable laptop.

You’ll also want to opt for an 11-inch or 12-inch screen instead of a smaller 10-inch model. The bigger displays will make multitasking easier, plus their companion keyboards will be much better spaced. Also, try to get 6GB of RAM if you can for better performance — you’ll find this in the base model of the Galaxy Tab S7+, while this year’s iPad Pro and the Surface Pro 8 start with 8GB of RAM.

Finally, while some 2-in-1s offer built-in LTE or 5G connectivity, not everyone will want to pay the premium for it. An integrated cellular radio makes checking emails or replying to messages on the go far more convenient. But it also often costs more, and that’s not counting what you’ll pay for data. And, as for 5G — you can hold off on it unless you live within range of a mmWave beacon. Coverage is still spotty and existing nationwide networks use the slower sub-6 technology that’s barely faster than LTE.

There’s no beating the Surface series when it comes to 2-in-1s. They’re powerful, sleek tablets running an OS that’s actually designed for productivity. The Surface Pro 8 is Microsoft’s latest and it addresses most of the issues we had with its predecessor. It’s thinner and looks more modern, borrowing the design of last year’s Pro X. Plus, it has a 120Hz display that makes scrolling endless spreadsheets or emails feel much faster. Just remember to drop the refresh rate to 60Hz if you want to get respectable battery life out of this thing. Windows 11 also offers a better split-screen experience for on-the-go multitasking.

Like most of the other 2-in-1s on this list, the Pro 8 doesn’t come with a keyboard cover — you’ll have to pay extra for that. That’s a shame, considering it starts at $1,099. Microsoft offers a variety of Type Covers for its Surface Pros ranging from $100 to $180, depending on whether you want a slot for a stylus on it. But at least they’re comfortable and well-spaced. You can also get the Surface Slim Pen 2 ($130) for sketching out your diagrams or artwork, and it also features haptic feedback for a more responsive experience.

If you’re already in the Apple ecosystem, the best option for you is obviously an iPad. The 12-inch Pro is our pick. Like older models, this iPad Pro has a stunning 12.9-inch screen with a speedy 120Hz refresh rate, but this year it uses mini-LED backlighting to deliver greater dynamic range. Apple’s M1 chipset is impressively fast too, and more than good enough for most tasks. Plus, the latest iPadOS is superior to older versions thanks to widgets and quick notes support.

Apple’s new Magic Keyboard provides a satisfying typing experience, and its trackpad means you won’t have to reach for the screen to launch apps. But it’ll also cost you an extra $300, making it the most expensive case on this list by a lot. The iPad also lacks a headphone jack and its webcam is awkwardly positioned along the left bezel when you prop it up horizontally, so be aware that it’s still far from a perfect laptop replacement. Still, with its sleek design and respectable battery life, the iPad Pro 12.9 is a good 2-in-1 for Apple users.

While Windows is better than iPadOS and Android for productivity, it lags the other two when it comes to apps specifically designed for touchscreens. If you want a tablet that has all the apps you want, and only need it to occasionally double as a laptop, the Galaxy Tab S7+ is a solid option. Though it was released last year, it’s still the best Android-powered 2-in-1 around. You’ll enjoy watching movies and playing games on its gorgeous 12.4-inch 120Hz AMOLED screen, and Samsung includes the S Pen, which is great for sketching and taking notes. The Snapdragon 865+ processor and 6GB of RAM keep things running smoothly, too.

Thankfully the company significantly improved its keyboard case over previous models, with more comfortable and responsive keys. You could type for hours on this thing and not hate yourself (or Samsung). The battery life is also excellent, so you won’t need to worry about staying close to an outlet. The main caveat is that Android isn’t great as a desktop OS and, while Samsung’s DeX mode offers a somewhat workable solution, it has plenty of quirks. Still, with Android 12L on the horizon, a simple software update could ease some pain.

Android might suck as a desktop operating system, but Chrome OS doesn’t. If most of your tasks take place inside a browser, the HP Chromebook x2 will serve you well. It has great battery life, an excellent 11-inch screen and looks nice, to boot. HP even includes the keyboard and stylus with the tablet, which almost none of the competition does.

Chrome still isn’t a great OS in tablet mode, and the Chromebook x2’s Snapdragon 7c processor sometimes struggles if you rack up too many tabs. It’s also a little pricey at $600, but you can often find it for $400 when it goes on sale at sites like Best Buy. That makes it a solid choice considering everything HP includes for the money.