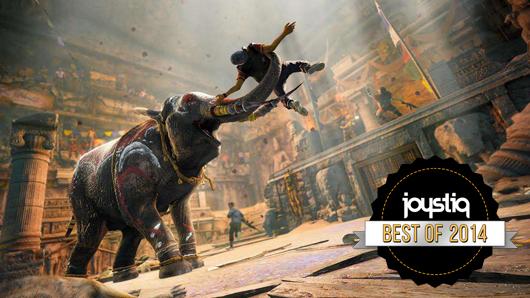 ATTENTION: The year 2014 has concluded its temporal self-destruct sequence. If you are among the escapees, please join us in salvaging and preserving the best games from the irradiated chrono-debris.
Far Cry 4 tells the story of a despondent man visiting a foreign land, just as hopeless, to fulfill the final wish of his late mother. Basically, the epitome of a good time!

Despite its dour setting, Far Cry 4 offers a level of freedom and unfettered joy that most open-world games do not. As protagonist Ajay Ghale you scour this space for treasures, fight off terrifying beasts (like the vicious honey badger), join a national rebellion and, yes, try to put your mother's remains to rest.

Your introduction to the brutal totalitarianism of Kyrat and its self-appointed ruler, a dapper but maniacal Chinese national named Pagan Min, establishes the horror your family's homeland has had to endure under his curled thumb. He is unruly and unhinged, and though you – the player – have no ties to the world he has conquered, it's clear that he should not endure as its leader. But the best of Far Cry 4 is in its distractions. You might be in Kyrat for a solemn reason, but that doesn't mean you can't spend a day terrorizing the local army, searching for hidden rewards, hunting ferocious wildlife (seriously, that honey badger), climbing mountains or gliding off peaks. There's so much to do, but what makes it work is how it all locks into the gears of the world. So little seems out of place or out of pace.

Your induction into the rebellion group fighting Pagan Min may be mandatory, but the how and when of his empire's fall is up to you. Though its true the game's bleach-haired bad guy is eccentric and obvious, how to handle his demise is open to your authorship. An internal struggle within the rebel army leadership, a group known as The Golden Path, means that you'll have to pick sides and mission goals. Ramifications come packaged with each selection and your decisions greatly affect the culture and war of Kyrat. What works best in the moment is that Far Cry 4 doesn't coddle; in fact, its systems can often align in ways that are so chaotic and deadly that you can't help but laugh. A tiger will interrupt a firefight, leap toward you and bite your head off. You'll creep calmly through enemy territory, only to have an eagle swoop down and claw at your eyes. You'll clear out an entire bad guy stronghold, silently, and then be greeted by a random vehicle that raises alarms and forces you into an emergent "king of the hill" scenario. Sometimes it's more fun when things go wrong.

Like other open-world games – and like nearly every video game - your character is the catalyst for momentum. That means the war against Pagan Min can sometimes slow to an obvious crawl, as you run off looking for some ancient something-or-other. Even then, there's no shortage of raw entertainment in Far Cry 4 whether alone or playing online.

The amount of adventures to be extracted from Kyrat is staggering. Whether or not you follow the path set out for you, or explore the gorgeous forests at a whim, there are few open-world games that can match this level of detail, choice and chaotic fun. As our review said, "Far Cry 4 may have installed a despot, but it's still the undisputed king of the open-world shooter."
[Images: Ubisoft]
Joystiq is highlighting its 10 favorite games of 2014 throughout the week. Keep reading for more top selections and every writer's personal picks in Best of the Rest roundups.

The list so far:​​
In this article: best-of-2014, far-cry-4, joystiq-best-of-2014, microsoft, pc, playstation, ps3, ps4, recommended, xbox, xbox-one
All products recommended by Engadget are selected by our editorial team, independent of our parent company. Some of our stories include affiliate links. If you buy something through one of these links, we may earn an affiliate commission.