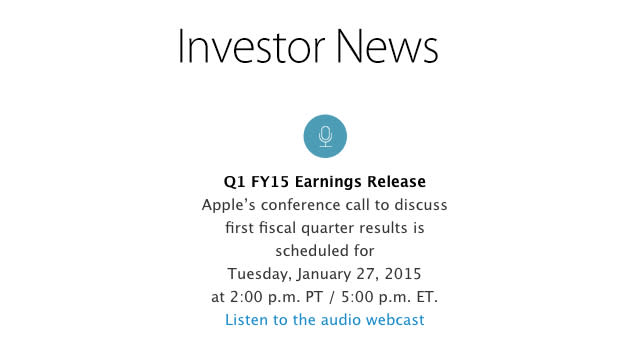 The news should be fascinating, as it covers the period of time during which the wildly popular iPhone 6 and 6 Plus were first available in quantity. During the last fiscal quarter of 2014, Apple made $8.5 billion in profits on revenues of $42.1 billion, primarily thanks to sales of 39 million iPhones.

During the last earnings call, Apple provided guidance for the first quarter of 2015 expecting revenues between $63.5 and $66.5 billion, with gross margins between 37.5 and 38.5 percent.

As usual, TUAW will hold a liveblog of the event to accompany the call. We'll be sure to let you know about the liveblog in the days before January 27.

In this article: apple financial, earnings call, news, Q1 2015
All products recommended by Engadget are selected by our editorial team, independent of our parent company. Some of our stories include affiliate links. If you buy something through one of these links, we may earn an affiliate commission.