Mountie: Team up your Mac and favorite iOS device 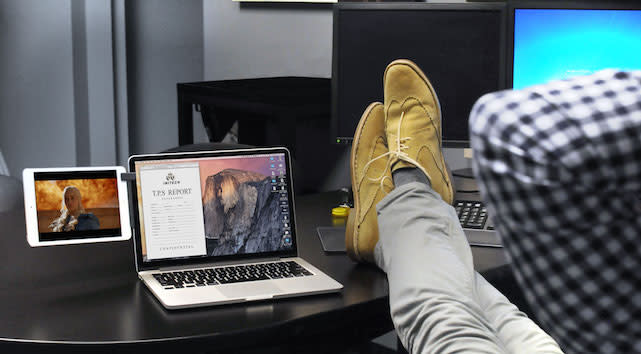 About a week ago we received notice of Ten One Design's newest product, Mountie (US$24.95) and about the same time received one for testing. After testing the Mountie with an iPad Air, an iPhone 6 Plus, a 27-inch iMac and a 13-inch Retina MacBook Pro, I can say that the innovative "sidebar mount" has totally changed the way I work. Let's take a look:

The Mountie has a deceptively simple-looking design, but obviously a lot of thought went into making it. The device has a T shape - the vertical piece sits between your Mac and iOS device, while the crossbar consists of two small padded clamps. Five different rubber grip pads are included with the Mountie. Depending on what device you're going to going to clamp to your Mac - and on which side - you'll place a thicker or thinner grip pad on each crossbar arm. Then you simply slide the Mountie onto the side of your Mac, close the clamp to lock it to your device, then take your iOS device of choice and clamp it into the other side of the Mountie.

So what did I end up using the Mountie for? Checking out my Mac Twitter feed through Duet Display ($9.99) and charging my iPhone 6 Plus at the same time. In the past, I have run Tweetbot for Mac ($19.99) in a window on my Mac, usually losing sight of my feed thanks to a dozen or so other open windows. Not so anymore - that Twitter feed is always in sight now with a glance to the side of my iMac.

I also used the side display to watch a few videos on the iPhone 6 Plus and iPad Air 2 this week while keeping the rest of my iMac work-related windows free and clear. Note that you don't need to run a Mac app on the second screen through Duet Display or Air Display ($19.99); you can just keep using your iOS device with its apps if you wish.

Where the Mountie really shines is when you are using a MacBook on the road and would like a second screen. Just slap it onto the display of a MacBook, pop the iPhone or iPad onto it, and you're rocking two screens - anywhere.

The best thing about Mountie? It doesn't take up any desk space like a traditional iPad or iPhone stand, and it can go with you anywhere you want to do work.

Ten One Design's Mountie is one of the most useful accessories I've seen in a while, very well designed, and useful for anyone who has both an iOS device (or two) and a Mac or two. My advice? Get one. In this article: accesssories, iPad, iPhone, Mac, ten one design, ten one design mountie
All products recommended by Engadget are selected by our editorial team, independent of our parent company. Some of our stories include affiliate links. If you buy something through one of these links, we may earn an affiliate commission.