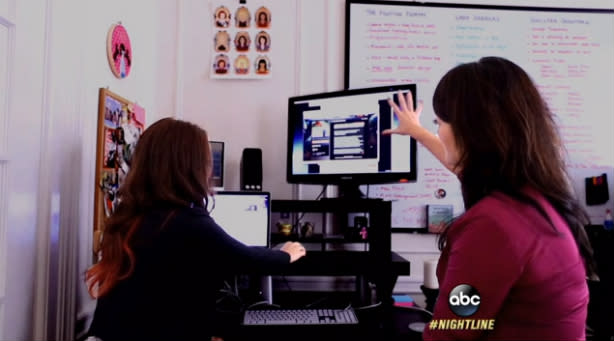 ABC's Nightline aired interviews with Anita Sarkeesian, Brianna Wu, Tim Schafer and a handful of video game critics and players on Wednesday, in a segment titled, "What It Feels Like To Be A Gamergate Target." It presented an overview of the issues involved in GamerGate, including the portrayal of women as sex objects in games, harassment toward women who play games, the growing market of women within gaming, and the argument that all games (or players) can't be represented by a few extreme examples alone.

Nightline highlighted "signs of change in the industry" with a visit to Double Fine co-founder Tim Schafer and a look at Broken Age.

"Once you've sat down and tried to play a game with your daughter and tried to find games where she can play a character that she identifies with, you start to feel bad about not putting that option in your own game," Schafer said.

Watch the complete segment below.

[Image: ABC News]
In this article: ABC-News, anita-sarkeesian, gamergate, harassment, nightline
All products recommended by Engadget are selected by our editorial team, independent of our parent company. Some of our stories include affiliate links. If you buy something through one of these links, we may earn an affiliate commission.