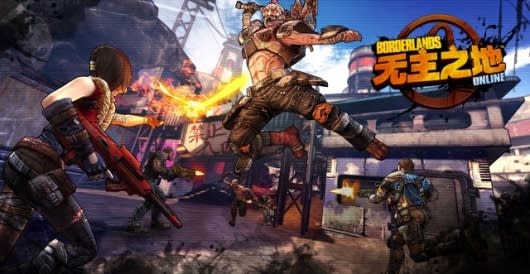 If you desperately want to play Borderlands Online but have no access to the upcoming China-only title, maybe the hard details on the game's systems will make you feel better. Or maybe they'll make you want to play it more; hard to say. The game will feature four classes: Soldier, which can summon a mobile turret; Hunter, which marks and weakens the target with a drone; Siren, which uses a little bird made out of fire to burn things; and Berserker, which can, well, go berserk.

Five categories of weapon will be available, with four of the categories locked to classes (Sniper Rifles for Hunters, for example) and Pistols being available for everyone. The game's first test, running from the 23rd to the 27th, will feature three towns with six instanced areas each for gameplay. Take a gander at the full details and some early press screenshots if you just can't find out enough about this new installment of the franchise.
In this article: beta, beta-testing, betas, borderlands, borderlands-online, class, classes, game-mechanics, gearbox, mmofps, news, news-items, shanda, shanda-games, test, testing
All products recommended by Engadget are selected by our editorial team, independent of our parent company. Some of our stories include affiliate links. If you buy something through one of these links, we may earn an affiliate commission.