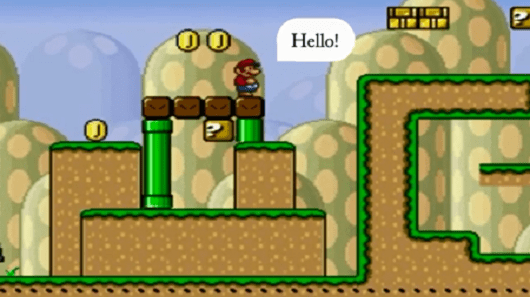 Who knew the end of the world would be prophesied by a weird mixture of Super Mario 3 and Super Mario World sprites? Researchers at Germany's University of Tuebingen are the naive harbingers of doom, and the Super Mario artificial intelligence they developed is their omen.

As shown in the video below the break, the researchers' Mario AI can understand a wide array of voice commands, learn a similarly substantial amount of data from instructions, and autonomously adapt to his environment. Tell him you can kill goombas by jumping on them, and he'll respond, "If I jump on goomba, then it certainly dies," albeit in a robotic voice. Or you can tell him to kill a goomba, and he'll start learning how to on his own (Danger! Danger!).
The Mario AI also has a bit of the Sim about him. If he's hungry he'll hunt down coins - now you know what he does with them. If he's curious enough then he'll go explore what's around him, and he can determine the best way to jump around his unsuspecting world.

The University of Tuebingen's prophetical programming will go up against other clever videos for the Association for the Advancement of Artificial Intelligence's People's Choice Award later this month. The winner's determined by which vid gets the most thumbs up on YouTube, and right now the goomba-killing Italian plumber looks a decent bet for the grand prize.

It may seem a strange symbiosis, but the idea of exploring and creating Mario AI is far from new. We reported back in 2009 about a script that effectively beat Super Mario World on its own, and for a few years there was even an annual Mario AI competition.

Fun trivia fact: The competition was based around the procedurally generated "Infinite Mario Bros." clone, as developed by one Markus "Notch" Persson.

For more on the University of Tuebingen's research, learn how to jump here.
[Image: University of Tuebingin, Nintendo]
In this article: aaai, aaai-2005, ai, skynet, super-mario-bros-3, super-mario-world, university-of-tuebingin
All products recommended by Engadget are selected by our editorial team, independent of our parent company. Some of our stories include affiliate links. If you buy something through one of these links, we may earn an affiliate commission.