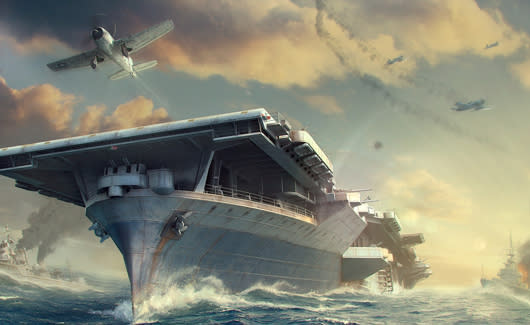 Wargaming has officially introduced the aircraft carrier to World of Warships. The class launch brings the total number of playable warship types to four including the destroyer, the cruiser, and the battleship.

"Aircraft carriers offer a unique angle to combat, delivering RTS-style gameplay and the ability to launch three types of warplane squadrons (fighters, dive bombers, and torpedo bombers) against any opponent," the company says.

In other WoWS news, Wargaming is planning a three-day testing event called Wings Over Water. It starts on January 23rd and runs through the 25th. Click here to sign up, and don't forget to watch the trailer after the cut!

In this article: beta, f2p, free-to-play, historical, pvp, video, war, wargaming.net, warships, wings-over-water, world-of-battleships, world-of-warships, wows, wows-video
All products recommended by Engadget are selected by our editorial team, independent of our parent company. Some of our stories include affiliate links. If you buy something through one of these links, we may earn an affiliate commission.