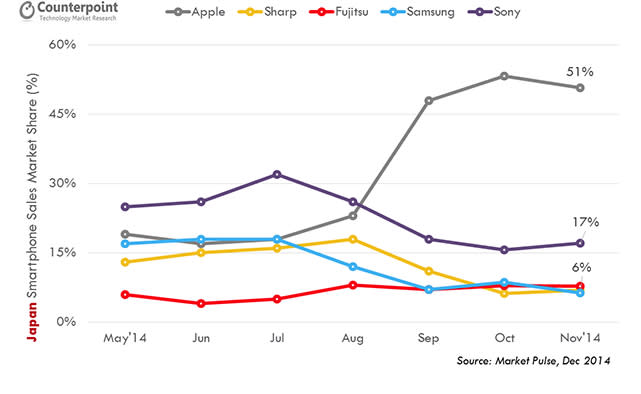 That's the report from Counterpoint Research. According to the Counterpoint Research, global Apple iPhone sales grew 26 percent annually crossing 20 million unit monthly sales mark for the first time ever in November 2014. Apple's iPhone sales volumes grew across key countries with timely global roll out of the flagship iPhone 6 and iPhone 6 Plus models and was also helped by the relatively lower-priced iPhone 5s and 5c targeting prepaid users in emerging markets.

"Apple's iPhone market share soared and reached record levels in Japan and Korea markets. In Japan, one of the most premium smartphone markets in the world, Apple captured more than half of the smartphone sales in October as well as November. Japan has been one of the strongest market for Apple and it is becoming increasingly difficult for competition to challenge Apple's dominance in near- to mid-term. Apple will likely benefit from the upcoming Apple Watch with a growing and premium iPhone user-base in this highly advanced consumer market."

There's no good news in Korea for Samsung, where the electronics giant has dominated the mobile phone business in its home country. Apple captured one-third of the total smartphone sales in Korea last November. Previously, no company had ever topped 20 percent on Samsung's home turf.

In general, many analysts expect the iPhone 6 and 6 Plus to have blow-out numbers for the 4th quarter of 2014 when Apple reports financial results on January 27.
In this article: iOS, iPhone, iPhone+sales, Jpan, Korea, news, Samsung
All products recommended by Engadget are selected by our editorial team, independent of our parent company. Some of our stories include affiliate links. If you buy something through one of these links, we may earn an affiliate commission.