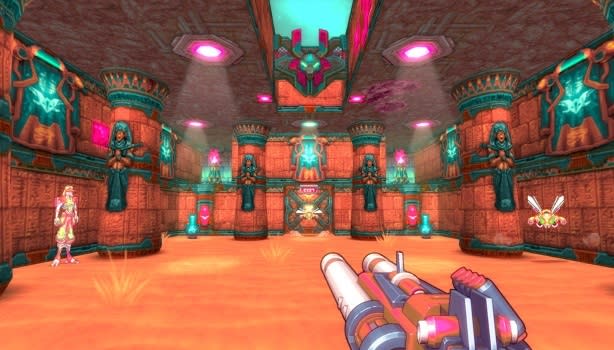 Amil Parra isn't a big fan of violence. That might sound strange coming from a man designing an homage to '90s sprite-based FPS games like Doom and Wolfenstein 3D, but one look at the game in motion and it becomes obvious that the inspiration Parra draws from those games is the feel, not the aesthetic.

Meet RetroBlazer: a PC game that feels like a 1994 run-and-gun shooter, but looks like something you'd catch between episodes of Biker Mice From Mars and Mighty Ducks (that's the cartoon featuring space-ducks fighting space-dinosaurs by the way, not the live-action film featuring a lawyer fighting to be a better person).

RetroBlazer tells the story of Jonas, an anthropomorphic canine soldier on a quest to defeat the evil Judgment Legion led by the villainous Lokhan. Like any good villain, Lokhan employs a nigh-infinite army of low-level goons to do his dirty work, giving Jonas plenty of targets to blast with his plasma-firing weaponry.

Sitting down for a demo at PAX South, I was struck by RetroBlazer's speed. Parra told me that the game mixes old-school feel with modern sensibilities, but being able to stand in one place and take your time aiming is definitely not one of them. This is an experience where you feel as though you're constantly moving at 45 miles per hour, gliding effortlessly over the terrain. More importantly, it feels good. In its current state, RetroBlazer is fast, responsive and fun. It's been a long time since I could strafe fast enough to dodge bullets and even longer since I could cease worrying about aim-down sights on my weapons. It might not be gory, but every hit received and shot fired feels like it has impact, and that's a satisfying feeling to have. Now if only I could see my enemies a bit more clearly and my eyes didn't feel like sandpaper when I blinked.

See, RetroBlazer's aesthetic relies on neon tones. A lot. And while that's a valid artistic choice, using it for just about everything and anything makes it feel less special when I fire plasma blasts or blow up an enemy robot, because all those colors and effects bleed together. Enemies also tend to blend in with the scenery, and the finer details of their sprites (which feature the kind of '90s-inspired power armor that I really like) are lost.

Still, tweaking visuals is far easier than altering core gameplay, and RetroBlazer has a solid foundation on which to build. It's currently seeking funding on Kickstarter, with a campaign goal of $110,000. You can download an alpha demo via the game's official site to see if it suits your fancy.
[Images: Hydra Game Works]
In this article: doom, hydra-game-works, kickstarter, pax, pax-south, pax-south-2015, pc, retroblazer
All products recommended by Engadget are selected by our editorial team, independent of our parent company. Some of our stories include affiliate links. If you buy something through one of these links, we may earn an affiliate commission.