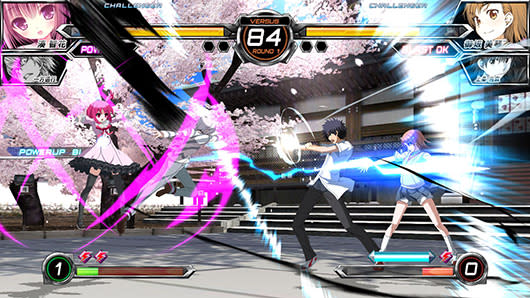 As the title suggests, Dengeki Bunko: Fighting Climax is a dream match of sorts that pits characters from the Dengeki Bunko line of Japanese light novels against one another in fairly traditional (if visually spectacular) 2D combat. Because Sega's publishing the game, Dengeki Bunko: Fighting Climax also features some notable characters from the company's extensive history in games, including Selvaria Bles from Valkyria Chronicles and Virtua Fighter icon Akira.

No specific launch date has yet been nailed down for Dengeki Bunko: Fighting Climax, but Sega plans to release the game to both retail and the PlayStation Network at some point this Summer.
[Image: Sega]
Show full PR text
SEGA ANNOUNCES


About SEGA® of America, Inc.

SEGA® of America, Inc. is the American arm of Tokyo, Japan-based SEGA® Corporation, a worldwide leader in interactive entertainment both inside and outside the home. The company develops, publishes and distributes interactive entertainment software products for a variety of hardware platforms including Windows PC, wireless devices, and those manufactured by Nintendo, Microsoft and Sony Computer Entertainment. SEGA® of America's Web site is located at www.sega.com

SEGA® Europe Ltd. is the European Distribution arm of Tokyo, Japan-based SEGA® Corporation, and a worldwide leader in interactive entertainment both inside and outside the home. The company develops and distributes interactive entertainment software products for a variety of hardware platforms including PC, wireless devices, and those manufactured by Nintendo, Microsoft and Sony Computer Entertainment Europe. SEGA Europe's website is located at www.sega.com


"PlayStation" is a registered trademark of Sony Computer Entertainment Inc.
In this article: dengeki-bunko-fighting-climax, playstation, playstation-vita, ps3, sega, vita
All products recommended by Engadget are selected by our editorial team, independent of our parent company. Some of our stories include affiliate links. If you buy something through one of these links, we may earn an affiliate commission.