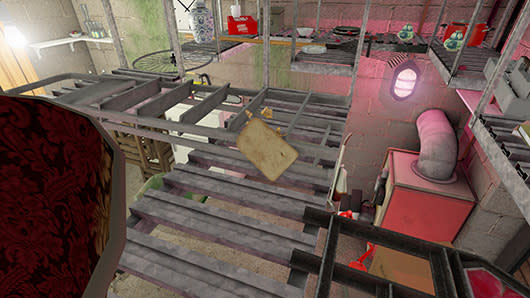 Before you start seeking metaphorical meanings, the game's title is literal: I Am Bread casts players as a piece of bread attempting to toast itself. That's easier said than done, however, as bread isn't very mobile, so players must flip and flop their weirdly pliable square of carbohydrates through complex stages first. If you need a visual aid, you'll find a gameplay trailer past the break.

"I Am Bread for iOS will feature all the new content Bossa is adding to the Steam Early Access version, including this week's major update – an all new garage area in which to find more innovative ways of turning golden brown and Cheese Hunt mode starring Crispbread," Bossa Studios claims.

No release date for the iOS version of I Am Bread has been nailed down, beyond a vague "later this year." Bossa plans to first finish the PC version of I Am Bread, before turning its full attention to the iOS game.
[Image: Bossa Studios]
Show full PR text
Snack On The Go as I AM BREAD Gets Set
For Delivery on iOS


You're out and about with a craving for toast, but all the cafes are closed. What do you do? Go hungry?

Not any more, as Bossa Studios has come to the rescue of toasties everywhere with the announcement that I am Bread will be rising on iOS in the coming months. Bossa's Master Bakers are currently tweaking the original recipe for I am Bread to ensure they deliver the same great taste already available on PC for those who enjoy their gaming on the go.

I am Bread for iOS will feature all the new content Bossa is adding to the Steam Early Access version, including this week's major update – an all new garage area in which to find more innovative ways of turning golden brown and Cheese Hunt mode starring Crispbread.

Check out all of the new features in the latest Bread Diary Video!

Before making the leap to iOS, however, Bossa would like to reassure loaf lovers the world over that I am Bread is being baked to perfection for PC first and foremost, with the mobile slice looking to pop up later this year.
In this article: bossa-studios, i-am-bread, ios, ipad, iphone, mobile, pc, surgeon-simulator-anniversary-edition
All products recommended by Engadget are selected by our editorial team, independent of our parent company. Some of our stories include affiliate links. If you buy something through one of these links, we may earn an affiliate commission.